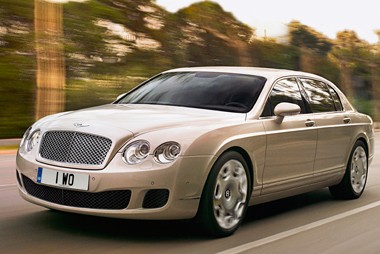 The Continental GT and Continental Flying Spur are the two major reasons why Bentley has enjoyed such strong growth since its acquisition by Volkswagen in 1998.

Although sales took a big hit last year, Bentley hopes that a replacement for its uber-luxury Arnage coupled with a facelifted Flying Spur will entice customers back into showrooms.

The company describes the 2009 Flying Spur as having undergone “a subtle evolution”.

Under the skin, there’s a retuned Servotronic power steering for improved feel, and revised spring, anti-roll bar and damper settings which reduce the sensitivity of the old model to road ruts and grooves.

A retuned exhaust system, combined with an acoustic tri-laminate undertray and wheelarch liners, makes the car all but silent under 5,000rpm.

Elsewhere, the evolution is centred on new options, such as the radar-based adaptive cruise control system (£1,810), which manages throttle and brakes to maintain a pre-set time gap with traffic ahead, and the terrific Naim for Bentley audio system (£4,840).
Customers can also choose from a list of handcrafted finishes.
Driving performance and ability are largely unchanged.

The powerful 6.0-litre engine is smooth and refined. The steering is quite heavy, which can get tiring on congested roads, while four ride options take the car from floaty to, well, slightly less floaty.

This is a car designed to enable ‘chauffeur James’ to carry people in comfort – a job he will be able to perform with aplomb. It’s premium all-round, with magnificent craftsmanship and first class leg and head room. Neat touches include a rear head rest that adjusts to the right height when the passenger sits in.

Gripes include the alternating pitches of the rear and side parking sensors which can be disorientating, and the 90-litre tank which, when our car was averaging 16mpg on mostly motorway driving (urban is just 11mpg), is good for only 300 miles. James will be making regular trips to the petrol station.