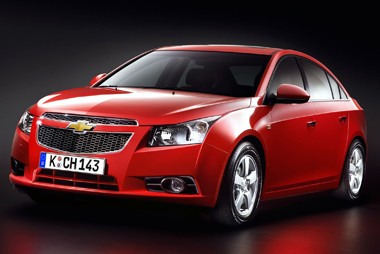 The Cruze is a major leap forwards for Chevrolet in the UK and has been pinned as the most important UK model launch for the brand since its inception in 2005.

Dealers have been salivating over the prospect of a replacement for the Lacetti and they’ll be pleased to know that things that desperately needed addressing, like interior quality, have been given the attention they deserve.

The new Cruze kick-starts a three-pronged brand overhaul for Chevrolet, which will see the Spark supermini introduced later this year and a new seven-seat MPV Orlando in summer 2010.

Bold American influence on the Cruze’s styling is more apparent than previous Chevrolet models and it’s the carmaker’s intention for the new model to be used as a global product. It’s built on GM’s Delta platform which will also form the basis for the new Vauxhall Astra.

The centre console and layout of the Cruze’s interior takes inspiration from the Insignia and moves the Cruze away from bargain bin looks of the past. Despite the enhancement, there’s still a lot of hard grey plastics on show but it’s a vast improvement over the Lacetti.

Customers get a choice of four engines – 1.6-litre 111bhp and 1.8-litre 139bhp petrols, plus two diesels, both 2.0-litres and with a choice of 123bhp or 148bhp power outputs. A four-speed automatic transmission is limited to petrol models.

The LS model, expected to be the best-seller in the range, starts at £12,595 for the 1.6-litre manual and includes air conditioning as standard, plus 16-inch alloy wheels, a chrome edged radiator grille, front fog lights and reverse parking sensors.

Dealers are expected to shift 2,000 units in the UK in its first year of sales and Chevrolet is targeting customers heading into retirement and looking for a value product after giving back their company car.

The Cruze is also a much more credible prospect than the Lacetti in terms of the potential for enticing customers to the brand or even converting some buyers that are considering a cheaper alternative.

Initially, there will only be a saloon version of the Cruze on sale in the UK which could be a potential stumbling block for dealers because hatches are the preferred design here.

Prices start at £11,545 which puts the Cruze in Kia Cee’d territory.

Chevrolet will be continuing with the Lacetti for another year and won’t be doing a station wagon version of the Cruze. The brand is looking for the new Orlando to take up customers looking for more space.

Chevrolet says the Cruze is a whole new type of car for Chevrolet, as it takes on value market rivals such as the Kia Cee’d and Hyundai i30 as well as competing against more premium models, such as the VW Jetta. It believes that in quality and dynamic terms it can more than match the opposition.

It believes its incredibly competitive pricing will, in a value-focused market where customers are thinking hard about their money, make it an incredibly tempting retail proposition. Chevrolet says its their best car yet, and it’s proud of it.

Auto Express
It doesn’t really offer anything new in this class. However, it’s an honest compact family car that does exactly what it sets out to do .

Autocar
For a lot of less demanding drivers, this is a very, very tempting package, especially in the current economic climate.

4Car
The most convincing Chevrolet ever, but it still trails its hatchback rivals.

Car magazine
Although it doesn’t quite hit the mark, the Cruze shows there is some decent and relevant product in the pipeline at GM.