There was a time when 4x4s (now termed SUVs) were symbols of success. Being seated above other road users was as much metaphorical as it was physical.

That’s not the case any more, and the budget brands are bringing SUVs to the masses. Hyundai is a prime example, with its Santa Fe selling over 12,000 units since its UK launch in March 2001.

Now the Korean carmaker has launched its entry SUV, the Tucson (pronounced Too-son), which aims to be a more affordable rival to the Land Rover Freelander. It’s squarely aimed at the ‘lifestyle’ buyer rather than any serious offroader and Hyundai is hoping to attract customers who may not have previously considered a sports utility vehicle.

The car runs in front wheel-drive mode normally, unless it detects a loss of traction, in which case the torque-on-demand system kicks in.

There is a 4WD lock switch if you are feeling adventurous enough to take one off the Tarmac, but this only works up to 21mph and a lack of ground clearance limits mud-plugging.

There are three engine options – two petrols and a 2.0-litre diesel. The 2.7 V6 petrol, used in the Santa Fe, is lively, but thirsty. The biggest seller is likely to be the 2.0-litre diesel unit, not for its pace but for its good torque – ideal for the caravan contingent.

The interior feels a bit cheap, with seats that look dated, but of course buyers get what they pay for, and the starting price is less than £15,000.

The driving position is good and there is also plenty of interior space, while the rear seats will fold down to create a completely flat load area.

It is practical and will appeal to those who want a well equipped, affordable 4x4 for town driving. Hyundai expects to sell around 3,500 in the UK next year and with SUVs now accounting for 20% of its annual sales, the Tucson is an important introduction. 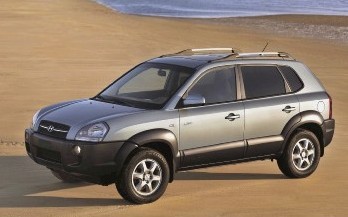