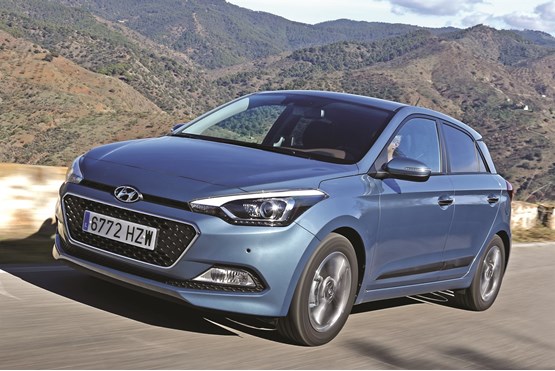 Hyundai is keen to keep its sales momentum moving towards its goal of a 5% market share with the new i20, as it competes against tough mainstream competition from the likes of the UK’s most popular car, the Ford Fiesta.

Hyundai saw a slight dip in market share in 2014, down from 3.4% to 3.3%, despite a registration increase of 6.59% for the same period, but new models, such as the i10 city car and this new i20, will help claw back some segment share for dealers. The new supermini will have a retail bias, with dealers taking two thirds of the expected 17,500 annual sales.

That is a lot of volume for Hyundai, which saw registrations for the current generation i20 peak at 14,729 last year (see graph, above), but it’s minuscule in comparison with the Fiesta, which moves 120,000 units a year in the UK.

On the positive side, that shows Hyundai dealers have a big market to go for and it’s possible the i20 could chip away at some of Fiesta’s market share in the supermini segment.

The 1.2-litre petrol SE will be the most popular engine and trim combination.

There are perfectly serviceable 1.4-litre and 1.1-litre diesel engines, but the petrol is refined, with very little noise filtering through into the cabin, even at motorway speeds.

The i20 is a further move by Hyundai towards premium and being more design-focused, rather than value and practicality.

Hyundai plans to stand between volume and premium

When looking at it next to its predecessor, there has clearly been progress. The rear of the car looks tidy and the black C-pillar adds an element of premium flair. Some of the design changes bring the i20 closer in line with brands such as Volkswagen and Toyota, which both skirt a middle ground between volume and premium. That, ultimately, is where Hyundai wants to be, leaving Kia to be funky and ‘young’.

Hyundai specifically mentioned the Volkswagen Polo as the benchmark for this car and areas such as the cabin quality are a clear step forward over the current i20. While it’s not quite at the level of the Polo, there are now some nice soft-touch plastics and in terms of quality, it surpasses rivals such as the Toyota Yaris.

Unfortunately, Hyundai Kia’s design boss, Peter Schreyer, did not influence design on the i20 (or the recently revealed i20 coupé), so from the front end it does look quite generic. He is expected to have more significant input into new generation models after the i20 coupé. Schreyer’s influence will give Hyundai the kick in the design department it needs to take the brand to the next level.

Trim levels have been given an overhaul, with the Classic, Active and Style trim levels jettisoned in favour of S, S Air, S Blue Drive, SE, Premium and Premium SE. The idea is that these, particularly SE, are much more familiar as trim names for customers and residual value-setters.

Where Hyundai has been a bit bolder is with its infotainment system. Quite rightly at this price point and market segment, Hyundai has done away with a traditional touchscreen system on the Premium trim, instead preferring a smartphone dock on top of the dash.

Customers can link their phone to the car via Bluetooth, using apps such as Google Maps or Scout as their sat nav. This essentially makes sat nav free on entry- and SE-level models, giving dealers a nice differentiator to talk about in the showroom. That doesn’t mean dealers lose out on an upsell opportunity, however, as there’s still the option of a seven-inch touchscreen. The Premium SE trim adds large car features such as heated front seats, heated steering wheel and an opening panoramic sunroof.

Hyundai’s move towards premium does mean pricing for the i20 is creeping up and at £12,725 for the top-selling 1.2 SE, there is only a £235 price gap between it and a Polo SE. It says a lot about Hyundai’s confidence in the product to compete with the big boys.

What your customers will be reading about the Hyundai i20

The new car is very spacious and well kitted out, but in such a competitive sector its shortcomings – in terms of ride and performance – are highlighted. Still, the arrival of the new three-cylinder turbo next year could change all of that.

The new Vauxhall Corsa with a 1.4-litre turbo is a few hundred pounds cheaper, nearly as roomy inside, and feels much faster in everyday driving. Hopefully, the new 1.0-litre T-GDI engine will arrive sooner rather than later, and give the Hyundai a bit more of a fighting chance.

The i20’s roomier-than-average interior, fine driving manners and competitive pricing makes this one of the better buys in the small hatchback class, especially when you remember it comes with the reassurance of a five-year warranty.

Hyundai says the Veloster will drive incremental sales of up to 20,000 customers annually in Europe.