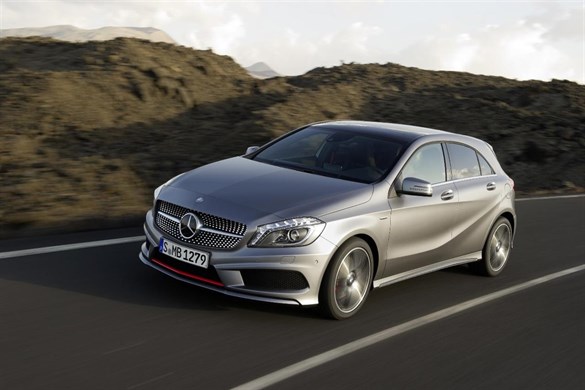 BMW and Audi must be getting sweaty around the collar. They've generally had it easy in the compact executive segment in recent years, as any ambitious young executive desiring a prestige set of wheels for his parking space left the staid Mercedes A-Class alone to its small fan base of retirees.

But Mercedes-Benz has got it right this time and there's a serious fight brewing for 2013.

It wants to take the slice of the market that it is now rightly due. In fact Mercedes-Benz UK sales director Mike Whittington suspects the ceiling will be set by supply constraints, not demand.

He said:"We'll sell as many as we can get hold of. I'd like to be in for 25,000, but we probably won't get that many. The A-Class will be positioned very competitively. It's a fantastic chance for us to get younger conquest buyers."

That is a key role for new A-Class. The new car has already been shown at the Canary Wharf MotorExpo and Goodwood Festival of Speed.

Dealers get a left-hand drive demonstrator in September to show customers, with TV and broadcast marketing in November ahead of December's launch. Like the A3 and 1 Series, the new A-Class is a proper hatchback. It's arguably better looking than its rivals too.

Entry to the Mercedes-Benz new car experience now starts at £18,945 for a base model A180 BlueEfficiency, and the brand is bound to have highly attractive PCPs to help keep monthly payments below the £300 mark.

Going up the ladder, SE and Sport trim levels offer more kit and greater choice of powertrain &ndash; both being offered with the 122bhp A180 petrol and a 109bhp A180CDI diesel, with CO2 emissions as low as 98g/km in manual guise, and the Sport also offering a 156bhp petrol A200 and a 136bhp A200CDI diesel.

It is here where the core volume will be sold. For the £1,200 walk-up the SE buyer gets 16in alloys, fabric sports seats and leather steering wheel above the standard car's CD/radio with 5.8in colour display and USB/aux-in.

The ultimate A-Class is the Engineered By AMG derivative, offered only on the most powerful petrol and diesel engines, which gets even more kit such as a diamond grille with one louvre, red brake callipers, privacy glass and bi-xenon headlamps.

Plenty of options give the dealer a chance to increase the invoice value.

Top technology includes connectivity features for the iPhone through Siri, which lets drivers access the phone through the car's controls and display, and a collision mitigation system which supports the driver if it detects a crash is imminent.

The low emissions diesels will get plenty of interest with Mercedes-Benz putting more focus on fleets, but no derivative in the range will struggle to find takers. Expect the A-Class to feature on many more business parks in the future.

What your customers have been told about the A-Class

The standard suspension puts the new A-Class slap bang in contention with its rivals; it is a lovely machine to drive and reasonably sharp when you want to make progress. The A-Class will sell by the bucketload purely on the strength of its provenance. The Volvo V40 and the Audi A3 have marginally better dynamics, but the Merc gives you a star on the bonnet and that's important in this badge-obsessed world.

Although the new A-Class offers a radically different driving experience from its predecessor, it doesn't set new class standards. It is well rounded and highly competent in areas that matter most, and will appeal to a much broader - younger audience.

Mercedes-Benz has already done well to create a more youthful image for the A-Class through its advertising, and the fact that there is a new choice in the sector with established prestige should make it attractive to some drivers who want to make a change from the default premium badge choices. That it should tick all the important boxes for fleet running costs makes the decision of the organisation paying for the car a little easier.