This year has been a real challenge for Mercedes-Benz. Confronted with falling car sales in the UK, a poor showing in the JD Power quality surveys and a number of product recalls, it has also faced the logistical challenge of launching a number of cars into new niches (B-class, CLS and the R-class, due early 2006).

Into this environment comes the carmaker’s range- topping halo car, the S-class. Success is paramount to the brand regaining its position as a premium choice for the discerning motorist.

There was speculation that Mercedes would reduce the amount of technological wizardry in this model after faults with previous cars. But while some bits have been simplified, there’s still enough gadgets and features to impress senior executives.

Take the seats, for instance. What a feat of engineering: they can adapt to every conceivable configuration, expanding and contracting to ensure optimum comfort. In addition to the usual back, head support, lumbar and slide functions, drivers and passengers will have hours of fun varying the side bolsters (back and seat), thigh adjustments, heater/cooling fans and the massage facility, which has four choices from slow and gentle to fast and vigorous. If customers can’t get comfortable in this seat during a test drive, with its 12-way adjustments, they won’t get comfy in any seat.

Mercedes insists the S-class will not develop the faults or quality niggles affecting some other models, which has seen its image take a hit. In addition to unprecedented testing involving eight million kilometres with 500 cars and 2,000 drivers, it used new technology to pinpoint faults and enable immediate solutions in the laboratory.

As Mercedes vice president of car development Hans Multhaupt says: “It means we no longer have to guess at the problem.”

The S-class showcases what Mercedes is calling “the biggest breakthrough in vehicle safety since ESP”. Distronic Plus, a development of its existing system, is a proximity control system featuring a radar system that detects cars ahead to keep the S-class at a desired distance. It automatically brakes the car if necessary and speeds up when appropriate, operating between speeds of 0-200kph.

The system is complemented by Brake Assist Plus, which also registers vehicles ahead and gives a warning if the gap is too small. If an accident threatens, it calculates the ideal braking distance and applies the brakes.

Also helping to reduce accidents is Night View Assist, which premieres in the S-class. Based on an infrared light, it illuminates the road, projecting the image onto the instrument display. Mercedes calls its active and passive safety systems Pro-Safe.

Mercedes expects to sell 2,600 next year, rising to around 3,000 in 2007, matching the model’s best ever sales year. UK MD Dermot Kelly calls it “a conservative target”, pointing out that the S-class now faces much greater competition in the diesel market as rival carmakers launch their own oil-burners.

But he promises good margins for dealers and a car that they will be able to sell at list price, with no discounting. 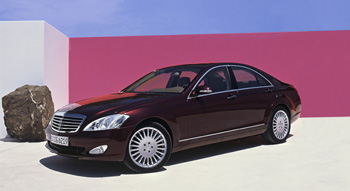 The S-class is a heavy car – more than two tonnes, in fact. That obviously affects the handling performance. No-one should expect SLK levels of agility, but the car does impress within reason. Executives looking to be chauffeured want a comfy ride and should plump for the air suspension. Drivers who want a bit more engagement, however, should go for the Active Body Control option, which reduces body movements by 60% compared to the current S-class.

Of the engines, the S500 offers rapid acceleration with impressive mid-range torque. The S600 takes it to a different, though largely unnecessary, level, while the S350 has the acceleration, but can struggle with shift-down overtaking. Each is astonishingly quiet and refined.

The S500 is the best of the petrols, but while the diesel S320 was not available for testing, we’d expect that to offer S350 levels of acceleration with S500 level of torque. No surprise, then, that it is expected to be the biggest seller.