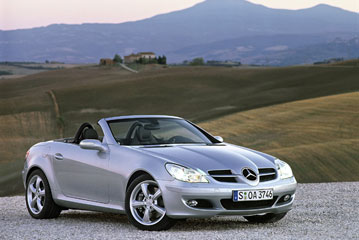 In the matter of the new Mercedes-Benz SLK: gorgeous or not? The old car was a style icon – pure, neat, perfectly proportioned.

Then down the catwalk comes the one for the summer ’04 season. Oh the proportions and stance are better than ever, but there’s just too much going on, especially with this one’s optional AMG bodykit.

But most people we met on the test run think this is a real beauty. But an SLK that was sharp to drive, one with truly sorted dynamics – a sports car in short – now that would be a surprise. Well, this new SLK is an eyebrow raiser.

Out go the dull old engines, their sticky transmissions and In their place, here’s a new 272bhp V6 engine. The manual transmission has been tightened up, and the auto’s a new seven-speed with manual override on wheel buttons. The steering is rack and pinion with lightweight suspension off the C-class, and it’s been developed by people who’ve driven a Boxster.

On sport suspension there’s enough body control and yet a ride that doesn’t punish you or the bodyshell too much. The impression is of a shell more rigid than a Z4’s. I also tried a car on 17-inchers and normal suspension, and that was the better poor-roads compromise.

The seats are surprisingly lightweight for a Mercedes , but there’s still room for a little fan blowing air through a vent behind your neck.

Mercedes has thrown the kitchen sink at the interior. To echo the exterior style, it’s another feast of curves, ornament and general optical noise. Every single button is silver-finished, and on the heavily optioned test car the effect was as if the thing had been peppered with lead shot.

Besides, most of those metallic bits are plastic, and move with a slightly brittle action. Like that F1-car nose on the exterior, it carries a dispiriting whiff of inauthenticity. This is a good and cheery car that doesn’t need dolling up.

Now, the roof. Don’t fret, it’s better than ever. The stacking arrangement now nestles the curvature of the rear screen directly below the similarly curved roof panel so they take up less space. Before, they were in mirror-image formation. Result is another 64 litres of roof-down boot.

Is the SLK a hairdresser’s car? No good asking me, for I have scant reason for interaction with the profession. But if you mean a fake sports car, it isn’t. This is the real thing.