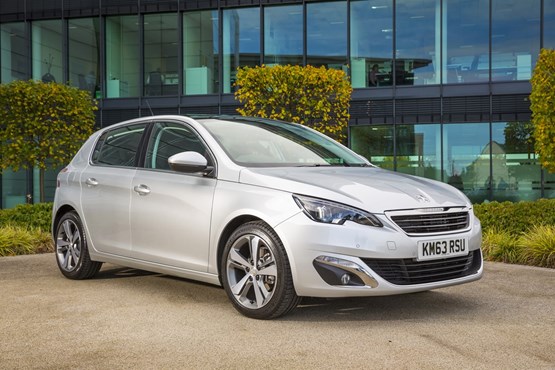 By Simon Harris and Tim Rose

Customers could be forgiven for thinking the car on these pages is merely a facelifted replacement for the outgoing model.

It is perhaps ironic that while Peugeot has traditionally signified the introduction of a new model by naming it as the next number in sequence, its newest car – an all-new model – retains the same nameplate as its predecessor.

It’s the first Peugeot to come from the new EMP2 platform – which is PSA Peugeot Citroën’s versatile modular components set that will be the basis for many future products, helping the loss-making company to reduce costs.

It has enabled Peugeot to cut the weight of the new 308 by up to 140kg – about the same as two passengers – compared with its predecessor and, among other improvements, make significant reductions in fuel consumption and CO2 emissions.

In case anyone hasn’t noticed, Peugeot announced when it launched the 208 that it also has big ambitions to take the brand upmarket. While that’s for the market rather than Peugeot to decide, there is more evidence of it in the 308 as it adopts premium features and even higher levels of perceived quality.

This means more soft-touch materials, combined with expensive-looking metallic trim parts inside, a large multi-function touchscreen display and an impressive lack of clutter on the dashboard – Peugeot somewhat unnecessarily calls this the i-Cockpit.

As in the 208, the steering wheel in the 308 is smaller, to help achieve a more engaging drive, while the main instruments are set high on the dashboard.

It’s a quiet engine, both from outside the car when idling and on the move, and with up to 199lb-ft of torque available, it’s pretty responsive as long as you keep the rev counter needle above 1,500rpm.

The petrol engines available at launch will be an 82bhp 1.2-litre and 125bhp and 156bhp 1.6-litre turbos, while the diesel alternatives will be 92bhp and 115bhp 1.6-litre units, which are both capable of more than 75mpg.

Next March, this range will expand to include 110bhp and 130bhp versions of a new three-cylinder turbo petrol engine, and two new Blue HDi diesels: a 120bhp 1.6-litre and a 150bhp 2.0-litre. The 1.6-litre is particularly efficient, averaging a claimed 91.1mpg with CO2 emissions of just 82g/km when fitted with optional energy-saving tyres.

The range will launch with four trim levels: Access, Active, Allure and Feline. The entry-level Access is likely to be a sparse affair, with steel wheels and no central command touch screen. Next up are the Active and Allure versions, which will prove to be the popular sellers as they will not only come with alloys and the touchscreen as standard, but also the full LED daytime running lights.

Finally, there is the range-topping Feline, which features a panoramic sunroof as standard as well as upgraded interior.

What’s been said about the Peugeot 308

Car Magazine
The 308 is too much of a mixed bag. For a company renowned for exterior design, the 308’s conservatism is a disappointment; conversely, the progressive, largely high quality interior is a winner. If you consider yourself a sporty driver, look away now, but if you enjoy life at a relaxed pace, then Peugeot’s new hatchback should be on your shopping list.

Parkers
If you’re on the hunt for a family hatchback, then the new Peugeot 308 needs to be on your list. There isn’t one particular stand-out reason for this, but a host of smaller reasons that add up to a compelling case for the new 308 as your next new car.

What Car?
Peugeot’s new 308 is competitively priced and cheap to run as a company car. However, its rear space and handling disappoint, and we find it hard to recommend the 114bhp diesel we drove given that it will be obsolete so soon after launch.

First drive: Peugeot 2008 gets a grip on a growing market