Suzuki has been guilty of letting its products fall behind their rivals. Its outgoing Grand Vitara models have been on the UK market since 1998, during which time the small SUV segment has welcomed a handful of model revisions and new launches, such as the Nissan X-Trail and Hyundai Tucson.

So the arrival of the third generation Grand Vitara has been eagerly awaited by Suzuki’s 145-strong franchised dealer network. And they won’t be disappointed. This vehicle, like the Swift supermini that Suzuki introduced in spring, has been designed and developed with European car buyers in mind, and gives dealers a competitive sales proposition.

Suzuki has ditched the separate ladder chassis design of previous Grand Vitara in favour of a lighter monocoque construction incorporating a series of strengthening elements. These are designed to provide extra rigidity and maintain its off-road capability, and retain decent ground clearance while reducing the overall height of the vehicle to improve on-road dynamics.

The new model has been given a solid, chunky style that Suzuki hopes will attract younger customers as well as appease current Grand Vitara owners. The wheel arches and sills are flared and aggressive.

Inside, owners will be pleased with the improvements in spaciousness and trim quality. Access to the rear seats in the three-door is still restricted, and requires sliding the front seats forward, but in both three-door and five-door the rear seats can be “tumbled forward” to increase load area.

Generally, the driving position is good and the controls are clearly positioned, although there are too many blank covers in the dash where extra switches should be.

Buyers initially have a choice of two variants: a three-door with a 1.6-litre 16v VVT engine that produces 105bhp, or a five-door powered by a 2.0-litre 138bhp 16v engine. A 127bhp 1.9-litre DDiS common rail turbodiesel, supplied by Renault, will be added to the five-door line-up in January.

All are coupled to five-speed manual gearboxes, although the five-door can be ordered with a four-speed automatic.

Suzuki GB sales and marketing director David Seward is conscious about launching the car in a tough fourth quarter so new Grand Vitara’s sales target for the end of the year is a manageable 1,200-1,500 units. In early 2006, Seward will drive the Grand Vitara’s TV advertising and will expect Suzuki dealers to hit a full-year target of 9,500 units, on a par with the outgoing model.

He adds: “We believe we’ve priced Grand Vitara very competitively. We’ve positioned the five-door so it is cheapest of the Japanese brands and £500 more than the Korean ones. And we’ve tried to position the on-the-road price at a point where it won’t be a million miles away from the actual transaction price.”

Seward says Grand Vitara will be a good profit earner for the retail network, which will be given a 10% margin, the same as they have had with the outgoing model.

All Grand Vitaras have permanent four-wheel drive. However Suzuki intends to market the three-door as a soft-roader, so it does not have the torque-sensing centre differential lock.

That keeps the price down but means that while the three-door copes fine with wet grassfields and tracks, the five-door is the choice for rougher terrain. With the diff locked in low ratio it will pull itself over small obstacles and ruts with reasonable ease, though the on-road-biased damping means occupants have to hang on for their lives.

On the road, both cars feel well planted thanks to longer wheelbases, wider tracks and reduced height, which cuts body roll. The three-door’s VVT engine is brisk and willing but lacks the long-distance legs of the 2.0-litre fitted to the five-door. However, it suffers intrusive transmission noise, particularly in the lower gears. 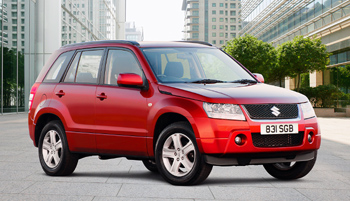