It’s also just signed up Pendragon, Reg Vardy and Arnold Clark, the three biggest retail groups in the UK. And they’ll be wanting their money’s worth.

Kia has set its brand slogan (or rather, parent Hyundai set the slogan) as ‘the power to surprise’, which is aimed at embodying its “exciting and enabling” brand values (Kia’s words).

Does the Rio conform to these principles, and can it make an impact?

It’s in a segment of the market that is fiercely competitive, one in which Ford, Vauxhall, Peugeot, Renault, Citroën and Fiat dominate.

And there’s no shortage of value brands, with Chevrolet, Daihatsu and Suzuki prominent. But one thing is immediately transparent: the Rio has been designed for European tastes.

Every aspect, from aesthetics and ride to looks, residual value and even the fine-tuning of the dealer network, has been scrutinized to prepare the car for Europe.

The issue of low running costs was further broken down into the sub-sections of engine size, fuel economy, road tax, insurance and servicing costs. The car definitely fulfils the ‘enabling’ brand value.

Paul Williams, managing director of Kia Motors UK, says: “We are hugely committed to bringing down the cost of ownership, while providing excellent standard specification and comprehensive warranties.”

By keeping a close eye on the relationship between the sticker price and the transaction price, Williams claims the Rio can achieve strong residual values and sustainable growth.

“We’re not about the numbers,” he says. “The standard of representation for the brand has to be there. We have worked extremely hard to reposition the brand and improve the dealer network.” The Rio goes on UK sale in October with a choice of two engines (1.5-litre diesel, 1.4-litre petrol), and will be backed by a national marketing campaign in January.

Next year, Kia expects the Rio to take 2.2% of the B-sector market, equivalent to 15,000 units. Good looking, well equipped, and likely to be priced at around £8,000, it’s a compelling package. Add in the Kia three-year, unlimited mileage warranty, plus pan-European roadside assistance and the Rio is set to become a key weapon towards Kia’s growth ambitions.

For its new Rio supermini, Kia started from scratch. The result is a car that is far superior to the model it replaces.

The Rio feels like a modern supermini, and with a shorter wheelbase it’s plenty of fun to drive, feeling agile on twisting roads while still being able to hold its own on the motorway.

The pick of the engines is the 110bhp 1.5-litre diesel unit, which is quiet and smooth but still powerful enough to make overtaking simple. It pulls well from low revs but doesn’t feel thrashy at higher speeds.

Our 1.5CRDi test car was a pre-production Euro-spec model and we were assured the soft ride will be firmed up for UK launch.

Unfortunately, no mention was made of the vague and sloppy five-speed gearbox, which seems to be a common flaw in Korean hatches (optional on the petrol engine is an automatic ’box). In an otherwise very good car, this was by far the biggest disappointment. 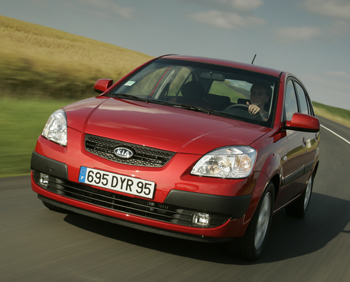 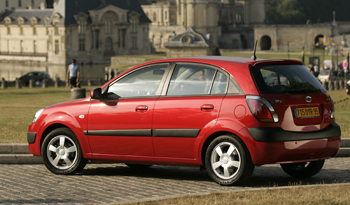