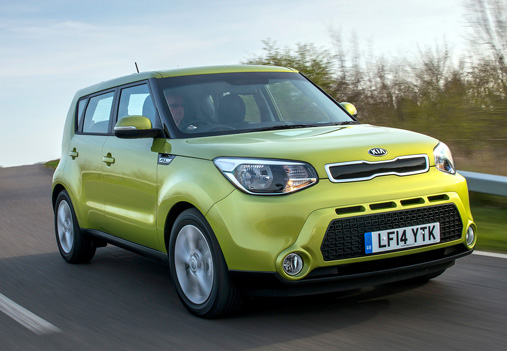 The first generation Kia Soul marked a step change for the brand in the UK. It had already introduced its Cee’d, which went on to be a core staple of the Korean brand’s range, but the Soul marked it out as being able to offer something funky, different and more design-focused.

Those brand values can be seen throughout the range now and the next-generation Soul has taken those ideas and pushed them on. The exterior is even chunkier than before and there are optional colour combinations available to customers on the top trims that give the Soul a black roof contrasting with the body colour, much like a Mini or Range Rover Evoque.

These styling flourishes are part of Kia’s hope to attract a younger audience for the model in the UK. In markets such as the US, the Soul is already a popular car for teenagers. The marketing campaign for the new model involves a viral video of anthropomorphised dancing hamsters (below), which has already attracted more than 14 million views on Kia’s US YouTube channel. The UK version of the video has had more than 7,500 views on Kia’s UK YouTube channel.

B-segment SUV sales account for more than 95,000 units in the UK alone and this is expected to rise to 150,000 by 2015, so it’s clear why so many manufacturers are looking to introduce models into this segment. Kia hopes to sell 3,000 units of the new Soul in the UK in a full year of sales, just a 3.2% share of the potential market.

The new Soul has a wider price range, with a lower starting price and higher top-end price and is focused more on retail buyers than the last generation model. Retail customers will account for 70% of the sales mix.

Kia acknowledges that the average age of the previous generation Soul was high due to its popularity with Motability sales.

The best-selling version is expected to be the Connect Plus 1.6 CRDi Manual (tested here) with about 20% of sales. That trim level (all engine and transmission variants) is expected to account for 35% of all sales.

The cabin in the new Soul is roomier – the new vehicle is 20mm longer, 15mm wider and 10mm lower than the outgoing model – and visibility has been improved with thinner A-pillars.

The change in dimensions means the Soul has a slightly more aggressive stance on the road, but it also means more space in the boot, which has been increased to 354 litres. This compares favourably with Nissan’s rival Juke, which has 251 litres of space in the boot.

The biggest changes on the new Soul can be found in the interior. There are now soft-touch dash plastics and more of a premium feel to the trim finishes in the cabin.

Three trim levels are currently available – Start, Connect and Connect Plus – with the range-topping Mixx and Maxx joining the range next month.

All versions are front-wheel-drive, five-door crossovers – Kia research has shown that while buyers desire the appearance, semi-elevated driving position and perceived safety advantages of a 4x4, they do not want the higher fuel consumption and taxation that four-wheel drive entails. There are two engine options – a 1.6-litre diesel and a 1.6-litre petrol.

The improvements in the cabin continue behind the wheel too, with tight and precise gear changes on offer. The steering on the Soul is quite light, perfect for city driving and the new model feels more composed and solid than the previous version. Customers can change the steering weight with Kia’s Flex Steer system to adjust it to their liking. The ride also feels improved, with the previous model feeling crashy on large alloys, while the new model is much better at absorbing bumps.

The diesel version of the new Soul was the only model available to drive at the launch, but it was a capable unit offering plenty of power and torque.

Kia’s problem is that the Soul is not competitive on CO2 against rivals such as the Renault Captur, whose entry-level diesel is 95g/km CO2, or the Juke at 104g/km. The Soul’s 132g/km of CO2 and 54.5mpg will hurt its prospects as a fleet option or among retail buyers increasingly making purchase decisions based on running costs.

Kia will introduce a fully electric version of the Soul towards the end of the year, but this still won’t be a mainstream fleet option.

Kia has pushed its Soul even further towards the mainstream with a much improved interior, ride and funky design which stands out against its competitors. However, the Soul plays a small part in Kia’s now established core model range and it will have to shout loudly to be heard above models such as the Sportage, which lead Kia’s marketing.

What your customers will be reading about the SOUL

Auto Car
If you’re after a stylish and practical compact crossover that stands out from the crowd, even among other crossovers, then the Kia Soul should certainly be on your shopping list.

Auto Express
The often overlooked Soul has been brought bang up to date and is a now a far tougher rival for cars like the Nissan Juke and Renault Captur.

Kia Pro_Cee'd GT puts fun and youth on the agenda