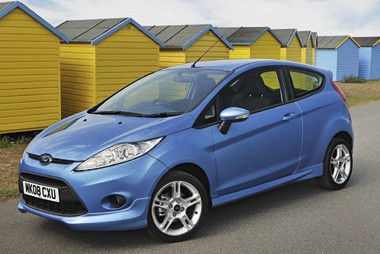 It’s been one of the best selling B-sector cars for three decades, chalking up 3.4 million sales since the first model was launched in 1977, and it’s also the UK’s top-selling retail car, period.

But its latest incarnation is arguably its – and Ford’s –most important.

The new Fiesta comes to market amid a host of rival launches that threaten to wrest the small car initiative away from the Blue Oval.

But Ford has played a trump card – it’s designed the sharpest looking, most stylish car in the sector.

The Fiesta features a trapezoidal grille, swept back headlamps and the rising belt line which characterises all new Fords.

The tapered roof gives aerodynamic efficiency while the exterior design elements are carried over inside the car which is
dominated by the mobile phone-inspired central console interface.

It is, says Ford, the most expressive show of kinetic design it has yet brought to market. And, as Ford of Britain boss Roelant de Waard puts it: “It’s all about style in this sector.”

Style puts the car on to the shopping list; then other priorities take over, such as quality, features and driving performance.

It’s sturdily built, feeling more like a big car than a small one, and is packed with equipment and features, including reach and rake steering adjustment, integrated turn indicators, automatic headlamps and wipers and powered door mirrors.

Ford also increased the budget for noise and vibration insulation.

Ford is looking to sell 104,000 units next year, a slight increase on the 102,000 sold last year, but is putting more emphasis on retail deals and selling higher up in the trim mix.

Consequently, the retail-fleet mix is forecast to move from 60-40 to 70-30 while sales will be split evenly between 3dr and 5dr.

Trim splits forecasts are 10% range-topping Titanium, 40% sporty Zetec (of which 5% will be Zetec S), 24% Style + and 24% Style. The remaining 2% will come from the very basic, fleet-only Studio model.

Just 1.6-litre petrol and diesel engines were available on the test launch which took in some snaking routes around Siena in Italy.

Steering in the standard car is all-electric, which makes it light and direct at low speeds but a bit lifeless at speed due to its lack of feedback.

The Zetec S, with recalibrated steering and sports suspension, is much better, more confident and sharper.

The petrol engine is punchy and smooth with surprisingly low gearing – good for efficient driving round town, but requires rapid change up when accelerating.

It’s quite similar in that respect to the diesel – a refined, gutsy option with superior mid-range power.

The budget allocated to noise insulation was money well spent – there’s virtually no road, engine or wind noise intrusion into the cabin.

Even though the extra insulation added 5kg to the weight of the car, overall the Fiesta is 40kg lighter.