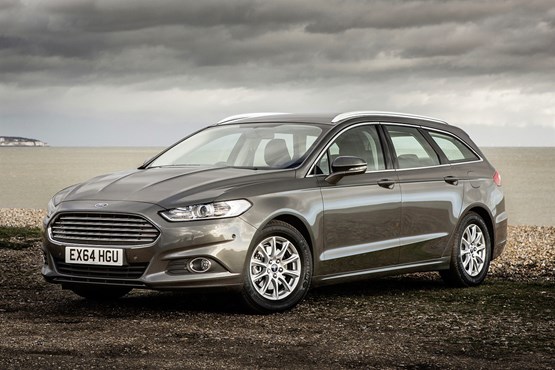 With more than 80 UK awards under its belt, the Ford Mondeo is clearly an iconic model and its 22-year lifespan hasn’t dulled its standing in retail or fleet markets.

Since the Mondeo launched in 1993, we have probably all sat in one at some point, if not as a company car driver, then being ferried about by parents or driving your own children around. With 1,400,000 sold in the UK, it is indelibly stamped on our motoring consciousness.

Available as a hatchback, saloon (hybrid) and estate, its latest iteration is recognised as extremely practical, which is further confirmed by the estate winning WhatCar? Best Estate this year. Sales director at Ford UK Andrew Barratt said: “The new-look Ford Mondeo is obviously a really strong model for us.

Interestingly Vignale, the high-end specification designed to enhance customer perceptions of the brand, was championed by Ford of Britain boss Mark Ovenden when it was first conceived in 2013 as a means for dealers to compete with Volkswagen.

It has been a busy time for the manufacturer. It replaced its whole commercial vehicle line-up last year and 2015 is set to be just as busy, as it replaces 45% of its passenger cars.

The new model has been treated to a full make-over, although competitors such as the new Volkswagen Passat (featured on page 96) and the current best-seller in the segment, the BMW 3 Series, beat Ford to the tape.

Its new look brings it in line with the rest of the current range, plus it is really up to date with its new dynamic LED adaptive headlamp technology (they give the indicator a really nice gradual sequence – think 1980s US TV series Knight Rider). It also marks the debut of inflatable rear seat belts as a safety add-on in a European Ford, but they are a £175 option.

The front is eye-catching and, although not much has changed to the rear, the new almost ‘fastback’ design gives  a sportier aesthetic, particularly to the hatchback version.

There are six variants in the engine line-up: two petrol, three diesel and one hybrid (Ford’s first in Europe), with five more being introduced soon.

The model has been selling for some time in the US and Asia, where it is called Fusion and doing rather well, but what are Ford’s predictions in terms of sales over here?

It is aiming for 20,000 sales for the new Mondeo in its first year, with the target market being the user-chooser.

The manufacturer predicts the proportion of the model sold retail to be 21%, up from 15% on the outgoing model, which equals a retail increase of 2,500 units in 2015.

Barratt said: “We also expect a 124% lease increase on last year with the new model.”

So Mondeo Man, the phrase coined 20 years ago by then PM Tony Blair to describe an affluent class of home and car owner, is as relevant today. According to AM’s research department, Sewells Intelligence, more than half of company car drivers are considering the fifth-generation model for their next company car.

In the largest study of its kind, half of those surveyed who usually consider lower, upper and executive cars in the User Chooser Barometer survey said they would definitely or likely consider the new car as their first choice.

Simon Staplehurst, commercial manager at Sewells Research and Insight, said: “It’s easy to be blinded by the kudos of a premium badge, yet surveys like the User Chooser Barometer highlight that company car drivers still consider or buy other options like Ford. Given that this generation of Mondeo will also offer a hybrid petrol-electric option, a first for Ford UK, it’s only likely to increase interest from drivers.”

Glass’s and CAP have given their predictions on residual values of the new model at three years/60,000 miles.

“Not only have residual values gone up, we have made it much easier to buy it in the first place with retail and lease figures both being revised,” Barratt said.

The new Mondeo is priced from £20,795 and 4,000 models are already on order, with first deliveries happening now.

What your customers will be reading about the Ford Mondeo

The new Mondeo Estate makes an even more compelling case than the hatchback version. The things it excels at (space and ride comfort) are crucial to estate buyers, even if it does without some of the practical touches you’ll find in the best estates.

The latest model comes as a saloon (as a hybrid only), hatchback and this attractive estate – and this is the model we would be tempted to go for. It’s good looking, better built than ever and has a great petrol engine in this 1.5-litre turbo.

There is plenty of space for five adults, it’s comfortable and the ride is impressive. Boot space at 500 litres fails to match the Passat Estate’s 650 litres, and it’s not down to a full- size spare taking up space. The Mondeo features a space saver wheel as standard.

Ford’s van-based MPVs, the Tourneo Connect and Tourneo Grand Connect, take aim at a new market segment for the company