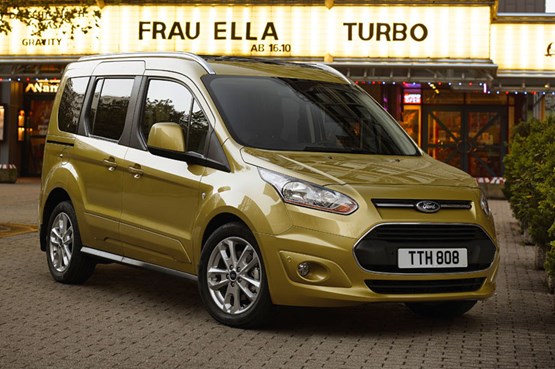 Ford is planning to take on the likes of Citroën, Volkswagen and Fiat in the van-based MPV stakes with its launch of the Tourneo Connect and Grand Tourneo Connect models next month.

The duo will expand the market-leading carmaker’s line-up of people carriers by offering a much cheaper entry point than a C-Max or S-Max.

Ford of Britain marketing director Anthony Ireson said although annual sales would be low by Ford standards, at about 3,000 units, this is expected to be conquest business for the brand, because it is entering this market segment for the first time. Ford expects sales to be about a third retail, and two thirds fleet and Motability.

It’s a segment worth 14,000 annual registrations in the UK, led by the Citroën Berlingo. The success of the Berlingo and Volkswagen’s Caddy Life shows consumer demand is there. All are positioned to offer space, ease of access, flexibility and value. They’re also popular with the private hire and Motability sectors.

Ireson said: “Many people want the additional space and flexibility that an MPV can offer, but they also want style and comfort, so they are the traditional buyers of the car-based vehicles. But there is a growing market for people who don’t value style so much, but what they do want is space and durability at a good price. A vehicle that fits a reality rather than a dream.”

At that price, neither comes with air-con or alloy wheels, but both offer sliding doors for easy access to the passenger seats, which fold flat to form a load area when needed, and a tailgate large enough to double as an awning.

Standard features at this level include front and curtain airbags, DAB radio with Bluetooth and a storage shelf over the front seats.

The seven-seater will be offered with a choice of 94bhp or 114bhp 1.6-litre diesel engines only. The five-seater, expected to be the more sought after of the two, will be offered with those two engines plus 99bhp 1.0-litre and 148bhp 1.6-litre turbocharged petrol engines, the latter coupled to an automatic gearbox. All but the auto model have CO2 emissions beneath the crucial 130g/km ceiling that allows business buyers such as minicab firms to claim an 18% annual write-down allowance rather than 8%. These buyers will also appreciate the Tourneo Connect’s 20,000-mile service intervals and three-year/100,000-mile warranty.

Ireson said Ford and its dealers now face the challenge of making consumers aware this new MPV exists. Press reports and a print advertising campaign are planned to begin before the end of this year.

What’s been said about the Ford Tourneo Connect

While there’s already plenty of competition in the compact MPV sector from the likes of the Citroën Berlingo, Fiat Doblo, Peugeot Partner Tepee and Ford’s own C-Max, there’s definitely space for a more rugged, van-derived workhorse like the Tourneo, especially considering prices start at £14,245.

As with other MPVs in this class, it’s all about the maximum space and versatility for the smallest outlay. Ford promises the flexibility to load up all sorts of items, up to and including bikes, with plenty of flexible seating options and a host of stowage areas.

The choice of van-based MPVs is limited, but the Tourneo Connect stands out as the most accomplished. The Grand Tourneo Connect also offers genuine, flexible space for seven people and while it isn’t as good to drive as Ford’s own S-Max, it is bigger and cheaper.