Gullwing is set to fly again 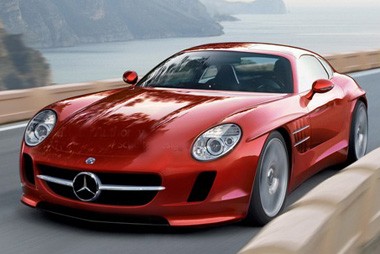 Mercedes-Benz continues to reach upwards in its quest for greater – and more profitable – sales.

Hence the proliferation of larger models such as the Maybach and exclusive top-end AMG versions bearing six-figure price tags.

It’s all part of a strategy to nibble into sales of the most premium carmakers of all, including Rolls-Royce and Bentley.

But now it’s taking the fight to Porsche and Ferrari with the new Gullwing supercar.

This spyshot reveals the car’s most striking feature: its gullwing doors, redolent of the 1950s original – one of the best-loved Mercs of all time.

They’re an obvious styling flourish on the two-seater and will make a big impact when you check into the Dorchester, although we don’t envy the poor soul who has to open the high-rising butterfly doors in a cramped multi-storey car park.

Unlike the slow-selling SLR, developed in collaboration with Britain’s McLaren, the Gullwing will be built largely from lightweight aluminium and not carbon- fibre.

Its platform technology will eventually underpin the next SL.

Powering the supercar is AMG’s sledgehammer 6.2-litre V8, so performance will be brutal.

Mercedes has outsourced this project to its tuning arm and it’s expected to wear an AMG, not Merc’s star, badge.

Expect to see the Gullwing at a 2009 motor show before sales commence in 2010.