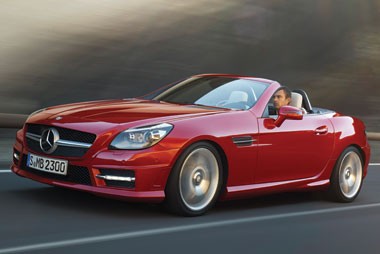 Mercedes-Benz should be able to get more men behind the wheel of the new SLK.

The first two generations had strong appeal to women, who’ve accounted for two in three of their drivers, but the latest model is
styled and engineered to achieve a broader following.

The old model’s UK registrations had declined steadily to 2,354 last year since its 2005 record of 6,310 units. With the new car, Mercedes UK sales director Mike Whittington expects an uplift to around 4,000 registrations.

SLK is offered in three versions of steadily increasing performance, all of which feature Mercedes’ BlueEfficiency technology including start-stop.

Of the three, the least powerful, and lowest priced, SLK 200 will take the lion’s share of sales.

It has a 1.8-litre turbocharged four-cylinder engine that takes the car from 0-62mph in 7.3 seconds when coupled to a six-speed manual transmission, or in seven seconds with the optional seven-speed auto gearbox.

This car is the solution for buyers, such as business customers, who want to balance reasonable per-formance and great style with excellent fuel economy and emissions for the class.

The mid-range model is the SLK 250. It has the same engine, but re-tuned for more power and is offered only with the seven-speed auto transmission until a manual gearbox is added later this year.

Both the four-cylinder cars have a sound generator, engineered to give a more pleasing yell to the engine and make the cars sound faster than reality.

Buyers expecting sporty performance and a real sound to match the car’s looks will want the range-topping SLK 350.

Its 3.5-litre V6 engine has sufficient power and noise to please any driving enthusiast, and is capable of dispatching the 0-62mph sprint in 5.6 seconds.

Yet it still has great fuel economy and emissions.

For the first time, the sports car is offered in two grades: SLK and SLK AMG Sport.

Whatever the customer’s choice, the new SLK range offers a host of technology.

The folding metal roof is a feature for which the SLK has become renowned, and the new generation takes this further.

Aside from the standard body-coloured one, there are two options which may do well in the UK: a panoramic tinted glass folding roof and the same with ‘Magic Sky Control’ which switches from clear to dark at the push of a button, maximising the owner’s opportunity to take in the sky and sunshine.

Other options include the most popular airscarf neck-level heater (80% of UK buyers opt for it), airguide draught-stop, intelligent lighting, speed limit assist and a dynamic handling package which includes automatic adjustable damping and electronic variable steering.