Peugeot’s 206 has been such a success in the UK, with more than 550,000 registered since its 1998 launch, that the carmaker still isn’t ready to kill it off.

Its successor, the 207, is more super-sized than supermini, and will have a £9,000 entry point, so Peugeot believes the 206 still has a place “for the next few years” as its small family car for buyers with smaller budgets.

The B-segment is an extremely important one for Peugeot UK, so managing director Pierre Louis Colin needs his dealers to be fully behind 207. "We have so much confidence that this car is a winner, and we want everybody in the network convinced, too," he says.

Dealer principals have already been introduced to the car at its European launch in Majorca. Now their sales executives and technical staff will undergo two weeks of product training in preparation for the June 8 launch, which will be backed by extensive marketing, although Colin wouldn’t reveal what the ad spend will be.

He wants dealers to win sales from rivals such as the Renault Clio, Ford Fiesta and Fiat Grande Punto as well as migrating many existing 206 owners over to the new model.

Peugeot needs 207 to win instant public appeal – private buyers are expected to account for 70% of its 75,000 full year registration target – so its styling safely follows that of its popular predecessor. However, at 200mm longer, 65mm wider and 56mm taller than the 206, the new model provides much more space and comfort for its occupants.

Inside, the quality of materials and finish has improved. The 207 feels well screwed together and quite solid: it has gained more than 115kg in weight over the 206, much of which is due to safety strengthening and higher quality materials.

To reassure the family buyer, Peugeot has placed greater emphasis on safety, loading the 207 with equipment such as warnings for all five three-point seatbelts, Isofix mountings for child seats, front, side and curtain airbags, and energy absorbing front structures that comply with European pedestrian impact regulations. EuroNCAP has given it a five star protection rating for adult occupants, four stars for child occupants and three stars for pedestrians. 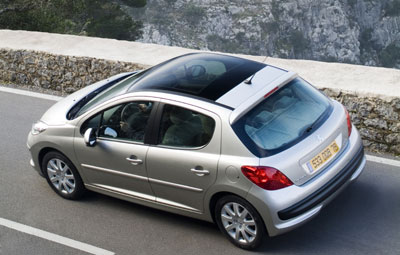 Petrol is still the most popular choice among the UK’s B-segment buyers, so Peugeot expects it to take 70% of sales, with the two 1.4-litre engines accounting for the bulk. The mid-range 1.6 HDI 90bhp is expected to be the most popular diesel, taking 16% of sales.

The 110bhp 1.6-litre petrol unit offered at launch, carried over from the 206, will be replaced at the end of the year by a 115bhp 1.6-litre engine developed jointly with BMW. Peugeot will also introduce a turbocharged 150bhp option.

Five trim levels are offered, from entry-level Urban, through S, SE, Sport and to the present range-topping GT (a 207 GTi will follow next year). Equipment levels are not over-generous on the lower-end models but Sport and GT cars come better equipped, with standard alloy wheels, front foglights, leather and chrome interior trimmings and air-conditioning.

A height-adjustable driver’s seat, pedals in line with the driver’s body and a steering wheel that adjusts for reach and rake means finding a comfy driving position is easy. 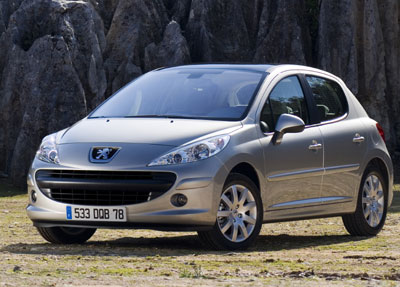 Of the cars available at the press launch, the 110bhp 1.6HDi is by far the best all-rounder. Its mid-range torque leaves its ageing petrol-powered equal looking thrashy and gutless. In fact, pick of the petrols is the 90bhp 1.4 16v unit, which is far more fun and capable, even at motorway speeds.

The 207 feels safe and controllable: the electrically variable assisted steering takes a little getting used to, but is feather-light for around town; the brakes are strong and reassuring.

The 207 is very good overall, but it slightly lacks the driver involvement its predecessor provides.