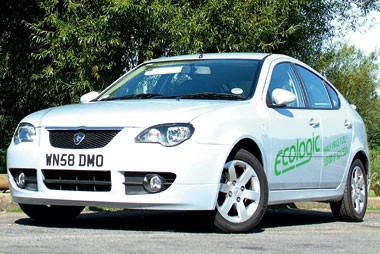 AM’s new long-termer Proton GEN-2 ecoLogic 1.6 Persona is a novelty in the office. Running on both unleaded and LPG (liquefied petroleum gas), it supposedly costs half the price
to run.

Typical buyers for the car include companies with small fleets and taxi operators, “due to the significant fuel cost savings by filling up on LPG”, said Proton.

The carmaker added that these customers also provided dealers with regular servicing work and promotion by word of mouth. It has also been a popular choice under the scrappage scheme, representing 23% of total Proton scrappage sales.
Let’s be honest – no Proton car is going to blow you away.

It feels little more than a shell of a car and is hard work to drive.
But, on the other hand, it has a good specification, including electric windows, rear parking sensors and alloys and it only costs £10,995.

Its petrol-only equivalent is also priced at £10,995, meaning customers can have LPG conversion at no extra cost.

With petrol costs once again on the rise, drivers may well be ready to consider an alternative such as LPG.

“For a motorist to convert their current car to run on LPG costs around £1,500 to £2,500 on average so to reap the benefits of cheaper fuel, they must first recoup the cost of the conversion,” said Proton.

“With the Proton GEN-2 ecoLogic range, they start saving money the first time they fill up on LPG instead of petrol as their conversion is free.”

Proton is the only manufacturer to offer an LPG conversion at no extra cost to its petrol-only model and for those looking for hard value, this is a winner for dealers.

AM is testing Persona, GEN-2’s saloon model, but LPG is also offered on its 1.6-litre hatchbacks GSX and GLS. GSX, its better model, comes with leather interior, tailgate spoiler and front, side and rear lower styled skirts.

Dealers can upsell from the GEN-2 GLS to the GSX model or offer a leather option on the GEN-2 Persona (£1,000).

As specification is already high, opportunities to sell accessories are limited, but Proton said its dealers benefited from significant margins across the range.

While Proton was unwilling to give sales figures, the GEN-2 ecoLogic range represents 30% of sales volume.

4Car
Half-price fuel bills, but you have to put up with half the quality of competitors.

Car magazine
Most buyers will feel nauseous after one clunk of the indicator or a prod of the lazy throttle. Still thinking of trading cheap thrills for cheap fuel? Just be careful what you wish for.

The Satria Neo is aimed at male drivers over 30, rather than the boy racer brigade that its design suggests.