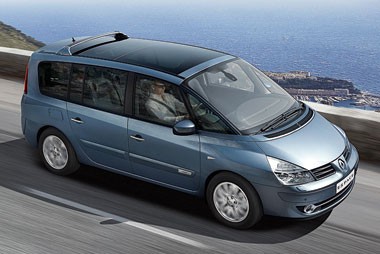 It’s long in the tooth – the launch was in 2002 - but Renault’s Grand Espace has shown it can still cut it against the large MPV youngsters such as the Ford Galaxy or Volkswagen Sharan.

It lacks the ultimate convenience of a fold-flat seating system like its competitors, but the task of removing and reinstalling its individual seats is not as difficult as prospective customers might predict.

Although quite heavy and bulky to lift out, all seven seats offer great comfort for any size of occupant and their ability to be slid back or forth on their runners means legroom can be optimised if less space is needed for luggage.

With an optional electric panoramic sunroof, this Grand Espace is also a light and airy place to be.

The fit and finish is strong, securing this car a place as a high-quality executive shuttle as well as great transport for large families with safety in mind – it has a full 5-star EuroNCAP safety rating and a 100,000-mile warranty. It’s a smooth, refined cruiser.

The one trim level offered on Espace, Dynamique TomTom, includes plenty of kit to keep this ageing model relevant.

Sat-nav, cruise control, automatic parking brake, parking sensors and dual-zone climate control are among the standard features, and buyers can up-spec to true executive luxury with an Initiale Lux pack.

Grand Espace’s weakness is in its efficiency, or rather lack of.

With 189g/km CO2 emissions and sub-40mpg combined economy, it struggles to compete against its newer rivals with more efficient powertrains.

However, given the small sales volume Renault UK expects of Grand Espace – around 500 units - its appeal should be sufficient to win the hearts of enough customers.