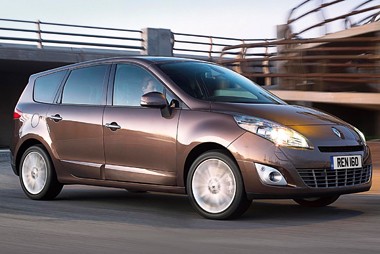 The Grand Scenic is one of Renault’s most important new models to hit the showroom this year, with its looks being brought in-line with Renault’s new sleek and desirable range.

Renault has launched the seven-seater Grand Scenic in the UK first in order to attract families which present a bigger market than the empty nesters that will go for the smaller five-seater Scenic model due in July.

It’s a much better looking proposition than it’s predecessor. Renault hasn’t really toyed around with the formula that has made the Scenic popular so customers shouldn’t be expecting any-thing revolutionary from the new model. There are 40 cubby holes to store stuff in and it’s very comfortable inside, with spongy soft touch plastics.

Renault maintains that the third row of seats is no longer a punishment or reserved just for children, but it’s still debatable as to whether a fully grown adult would be happy on a long journey in the back. The third row folds flat and the second row is removable.

Grand Scenic has the same suspension set up as the smaller Megane and is lighter than the outgoing model which means it feels very car like on the road rather than a people carrier.

Dealers will be able to sell on six option packs which bundle popular items such as parking sensors, electric panoramic sunroof and satellite navigation into simple packages, compared to purchasing the equipment separately.

Grand Scenic is extremely important to Renault and while the company would not reveal targets, it did say it’s likely to represent a 10% chunk of its total UK sales this year.

Renault believes there is no risk of cannibalisation because the Espace has a largely corporate fleet focus, whereas the Grand Scenic is pitched more towards retail.

The rivals for Grand Scenic are the Citroën C4 Grand Picasso, Vauxhall Zafira and Toyota Verso. Renault believes the main draws are the higher specification and lower starting price than the outgoing model.

Autocar
It’s good value, comfortable and endlessly practical. But the competition at the price level of the Grand Scenic DCi 160 is tougher than ever.

Auto Express
It’s hard to fault a car as cleverly designed as the Grand Scenic.