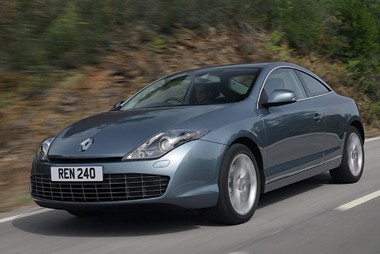 Renault has made a point of moving away from the quirky rear design that has featured on models in the past, saying it must stop “designing cars for designers”. It’s definitely succeeded here.

The Laguna Coupé’s rear is its best feature with lines that hint at a sporting pedigree akin to Jaguar or even Aston Martin.

The front shares a lot more in common with the standard Laguna, but it’s still the best looking out of the three model line-up of hatch, GT and Coupé.

It’s likely the Coupé won’t be selling in huge numbers with Renault saying that it wouldn’t be chasing sales from dealers.

Renault won’t give out sales targets, but when asked what percentage the Coupé would take from total Laguna sales the response was that the saloon coupé segment typically took 8-10% in the market, but they would have to see what happens to that market.

Dealers should be happy though as they’ll have more of a chance of conquest sales with the Coupé because it allows customers to stand out with a little extra style. Customers can enter Coupé territory for approximately £1,000 over the standard equivalent model.

AM tested the higher-powered 3.5-litre V6 petrol and new 3.0-litre V6 diesel which were both capable on the road. There’s minimal body roll when driving enthusiastically on winding roads, but the steering lacks feel.