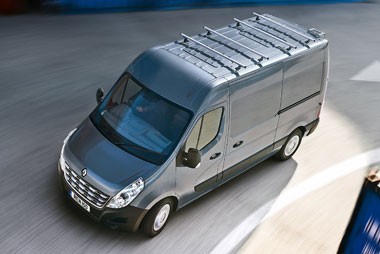 Can a battle for sales ever have been so bitter as the one being fought prior to the launch of the new Renault Master and Vauxhall Movano?

The vans, essentially the same vehicle with different badges, go on sale in May but already both manufacturers have revealed a host of special models and free specification.

First Renault announced that its range would cost from £20,795 while Vauxhall’s started at £21,660 (all prices ex-VAT). Then Vauxhall revealed a base Expression model at £20,250, and added £1,400 of free extras on all models bought until the end of July (except the Expression).

Renault hit back by adding a sophisticated colour TomTom sat-nav unit on
all Masters except the entry-level Freeway.

Both vans will be offered in the usual array of formats, including three wheelbases, four load lengths and three roof heights, chassis-cabs and other conversions, but new is the option of either front or rear wheel drive, in gross vehicle weights that now go from 2.8 to 4.5 tonnes.

A single 2.3-litre engine, specific for commercial vehicles, provides power choices of 100bhp, 125bhp and 150bhp, with torque of 210lb-ft, 228lb-ft and 258lb-ft. It improves fuel economy by around 4.1mpg over the outgoing 2.5-litre unit, while servicing costs have dropped by 28%. All vans have a six-speed gearbox and the 125bhp and 150bhp versions can be ordered
with a robotised gearshift.

ABS is standard, while ESP is provided on rear wheel drive models. Volumes go from eight cubic metres to 17cu m, while payloads go from 994kg to 2,254kg. Access to the load area has been improved with the rear doors widened by 17cm.