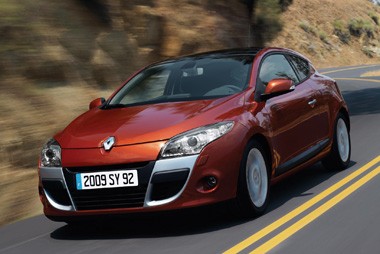 I’m sure there are still numerous people that continue to criticise the Renault brand, but I honestly think it’s on the right path with the quality and look of its models.

Twenty-somethings that want some looks, but don’t want to look too showy will be attracted to one of the most desirable Renault’s in its range. The Megane Coupé is pitched against VW’s Scirocco and the target customer is young, male, a manager living in the city with an active social life.

Renault wants dealers to sell on its design, equipment levels and the wide range of five diesel engines, two of which come in with CO2 emissions at 120g/km or below.

The Megane Coupé looks great and it’s already had compliments thrown its way from strangers in the short time it’s been on the AM fleet.

As dealers can already imagine, the Megane Coupé has only accounted for 1% of Renault’s UK scrappage sales.

There’s plenty of opportunities for upselling. There are four packs that customers can add on, including the hands-free pack for £500, the Xenon headlights pack for £650, Sunroof Plus for £800, which includes 4x15W radio CD with Arkamys 3D sound, fixed sunroof and hands-free Renault card and the £900 Convenience pack which features a fixed sunroof, front and rear parking sensors, tyre pressure monitor and heated seats.

At £19,035, it undercuts the Scirocco by £800, so the combination of price, good looks and generous standard equipment makes it a tempting option.

Minor annoyances include not being able to figure out how to change tracks on the stereo (surely it shouldn’t be that hard to figure out?) and a satellite navigation system which isn’t easy to use, in comparison to a much cheaper TomTom, Garmin etc.