No real surprises for residuals value performance: 4x4s have suffered the largest drop in values over the past month.

However, depreciation has affected every model segment.

But even city cars are down month-on-month.

The performance of 4x4s is in line with expectations with the sector down by 5.4%.

This drop continues a trend, ongoing for some time, as fuel and CO2-related taxation costs increase.

One factor that has changed is the relative fortunes of diesel and petrol in this sector.

But there are signs that this is now changing, as diesel pump price rises in particular are felt.

Moving into July there was a negligible difference in the negative movements shown by petrol and diesel 4x4s, suggesting that consumers are equally wary of the running costs of both types.

Some used car dealers are telling CAP that they are seeing a slowdown in demand for diesels.

In June, a quarter said some customers were turning away from diesel, while a further 15% said a lot of their customers were now not interested in diesel.

While this should be balanced by the fact that nearly half of the dealers researched said they had seen no change in preference – and some reported that demand was still rising – it seems to indicate the possible start of a trend back to petrol.

Given that the relative economy of diesel engines has been important in the 4x4 sector, this trend may be significant in terms of the fortunes of off-roaders.

Research also suggests a move away from larger vehicles, with used car dealers frequently reporting that customers are increasingly turning to smaller cars.

#AM_ART_SPLIT# Earlier in the year a large majority of dealers reported that customers were being encouraged to move into smaller engine cars in the face of rising fuel costs.

Almost 70% identified this trend while others said it was not happening yet, but that they expected to see more downsizing by customers.

The ongoing rises in VED costs, together with rising awareness of the costs around CO2 emissions, are also impacting on perceptions of larger vehicles.

Research confirms that customers are increasingly interested in both, which suggests that they may well change their buying habits.

Dealers believe that used car values are likely to be damaged by rises in the cost of VED, with 86% saying it is already happening.

Awareness of CO2 emissions is also growing among retail used car buyers, with almost half of the dealers researched saying customers were specifically enquiring about them.

This all indicates a growing consciousness around the costs of running vehicles, which lends weight to the suggestion that 4x4s as a lifestyle vehicle – rather than a workhorse – may move out of reach for some aspirational owners, reducing demand and values.

The AM Index this month shows that, despite the overall weak market, summer has brought some increased demand for convertibles.

However, it is a measure of the severity of the current slowdown that even here we are only talking about a better-than-average reduction in prices, with convertibles reducing by 1.4% overall.

But even here there is an overall reduction of one percentage point. 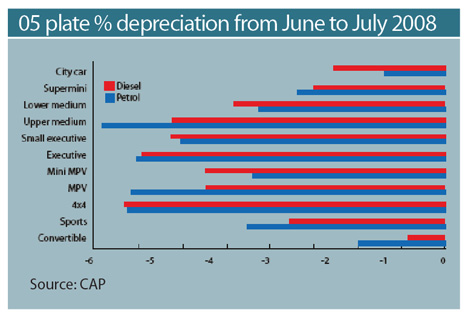