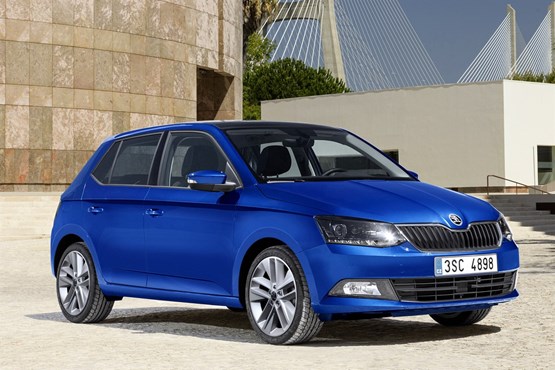 The new Fabia will form a key part of Skoda UK’s long-term ambition to reach 100,000 annual registrations after the Czech-built supermini reaches showrooms in January 2015.

It will have a tough fight on its hands, given that Vauxhall has just launched its new Corsa in the segment and demand for the Ford Fiesta, the UK’s best-selling car, shows little sign of abating. The next-generation Mazda2 is also arriving in early 2015.

However, Skoda UK director Alasdair Stewart is bullish about his 15,000-unit target for Fabia hatchback sales in 2015, with a further 7,000 sales expected of an estate version. That will be an increase of more than 50% on the number of Fabias sold this year, during their run-out.

Stewart said he will back the new supermini’s launch with a £5 million marketing budget in 2015, which will likely include digital promotions and a TV spot, plus some support for Škoda dealers’ own efforts.

While the loyal customer base will be a source of buyers, the dealer network will be tasked with attracting buyers from other brands, and slightly younger ones, too. The Czech brand hopes success with the new Fabia will bring down the average buyer age slightly from its current 53 years.

“We hope that Fabia generation three will hit younger customers. However, this type of car generally appeals to both ends of the spectrum,” said Stewart.

The £10,600 entry point doesn’t seem cheap, but a draw for those new customers, according to Stewart, will be “very compelling” PCP finance with strong guaranteed future values underwritten by Volkswagen Financial Services. Yet more crucially, he said, will be the Fabia’s connective technology – named MirrorLink – and the car’s improved design and personalised colour palette. Buyers can opt for contrasting roof and door mirrors and dashboard inserts if they wish.

The MirrorLink system is standard with the infotainment on all except the base-level Fabia S, and allows owners to run approved apps from the latest smartphone onto the in-car display via a USB cable.

One example used on the media launch was a sat-nav app, Sygic. Optional sat-nav was ordered by just 1% of previous Fabia buyers, so Skoda sees MirrorLink as enabling buyers who need such systems to access them at little or no cost. Other apps already available include personal radio, weather updates, audio books and information on parking spaces.

Traditional Fabia customers may miss their CD player, however. The new car’s infotainment system has none and, excepting its DAB radio, requires audio feeds from a smartphone or MP3 player.

Another useful function is SmartGate, which permits the wireless transfer of certain vehicle data to specific applications on a smartphone for storage and mobile use. Skoda’s Drive App, for instance, can show a driver how efficient their driving style has been for any trip, and also displays fuel consumption, average speed and journey costs. Users can also review their journey on a map, as well as post them to Facebook.

A G-Meter app can show acceleration and braking forces and speed, potentially useful for parents who lend their car out to their teenage offspring.

Retail buyers are expected to account for 70% of Fabia hatchback orders. However, Stewart says the car’s appeal could improve in the fleet sector due to its better fuel efficiency and lower emissions. In mid-2015, Skoda UK will add a Fabia Greenline variant with 82g/km CO2 emissions that will appeal to cost-conscious fleet managers.

Until then, the Fabia range will comprise a 1.0-litre three-cylinder petrol in 60bhp and 75bhp forms, a 1.2-litre turbocharged petrol in 90bhp and 110bhp forms, and a 1.4-litre turbodiesel with 75bhp, 90bhp or 105bhp. All have start-stop as standard. The 1.0-litre 75bhp model is expected to be the best seller due to its price point and efficiency, followed by the 1.2-litre 90bhp.

What your customers will be reading about the Skoda Fabia

The new Fabia is a very capable addition to the supermini class, with its roominess, ride quality and refinement all scoring it brownie points. It’s just missing some personality, both in terms of design flair and performance. Ultimately it’s a car that could only ever be a rational purchase, not something you’d buy because you really want it.

The Fabia might not be the ultimate budget offering it once was, but with this level of equipment it’s far from expensive. It’s a soothing small car to drive, with welcome composure and finesse.

Besides, the practicality, efficiency and kit on offer here still represent strong value for money, and combined with the new inoffensive, chunky – maybe even predictable look (it’s quite customisable and fairly colour-dependent, we reckon) – the new Škoda Fabia is sure to be a supermini winner for those who rank space above sportiness.

Skoda is very much a brand that knows how to shift perceptions and so, with the new Rapid, the Czech manufacturer will be tasked with tempting UK buyers with a model shape which has never been very popular here.