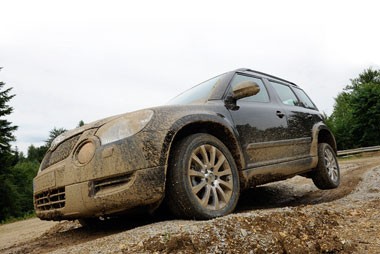 As the self-acclaimed “manufacturer of happy drivers”, Skoda seems obliged to generate amusement and comment with model names.

To Roomster and Superb add Yeti, a chunky and ostensibly funky SUV crossover due in showrooms on September 17.

The Yeti’s long trail to market can be traced back to the 2004 Geneva show concept car and the answer to who put the man beast’s name forward is freelance Hungarian designer Peter Kukurelli, a consultant on the original project.

Not that the Yeti will roam the lower and upper slopes of suburbia in large numbers. Robert Hazelwood, Skoda’s UK brand director, offers the “conservative estimate” of up to 4,000 annual sales, conceding that it could generate “significantly higher volumes.”

The Yeti, based on an Octavia platform, will be projected via Skoda’s network as a crossover.
Nissan’s Qashqai is the specific target rival, along with other compact SUVs, MPVs or whatever passes for cross-overs and conventional hatchbacks occupying the same footprint
as the Yeti.

Four-wheel-drive variants should account for 35% of Yeti sales against just 15% for the Qashqai.

Hazelwood believes the Yeti provides an opportunity to redefine the Czech brand, command a 66% conquest rate and drag the average age of Skoda owners down from 55.

Yeti embodies an assertive front end and stance without being overtly aggressive. It is the tallest Skoda, standing 1.69 metres to the top of the requisite roof bars, and nearly the widest at just 24mm narrower than the Superb.

There is plenty of room inside for five six-footers, but any move towards a seven-seater would require stretching the wheelbase.

Seats-up rear luggage space, at 416 litres, is underwhelming. In mitigation, the clever Varioflex system allows folding, sliding and flipping of the seats.

Removal of all three rear seats provides 1,760 litres of stowage.

The Yeti demolishes outmoded views of past Skoda standards in terms of the cabin’s fit, finish, fabrics, controls and instruments.

Without the green-winged arrow motif on the steering wheel, it could be an Audi, courtesy of upscale fixtures and fitments transplanted from the Superb.

The inclusion of optional radar-guided Park Assist is a boon and the latest generation of spooky automatic guidance moves the Yeti forwards as well as backwards to slot into spaces just 80cm longer than itself.

If the Yeti’s driving environment eclipses the Qashqai, its road manners are also superior.

On Tarmac, the five-speed diesel 2.0-litre front-wheel drive, 110bhp SE combines refinement, balance and tactility. Only thick A-pillars get in the way at junctions.

Off road, the 140bhp, 4x4 counterpart, with Haldex differentials and related electronics, illustrates why it should excel in Alpine markets.

Even on standard road tyres, it trundles across variable surfaces and overcomes vertiginous gradients courtesy of the magic “off-road” switch.

It slithers down steep inclines in neutral, and even, logic defying, when the machine is stalled.

Once you’re past any initial consternation over brand and model name, you’ll find yourself in one of the most well-adjusted motors on the market.

Skoda wants you to think of it as a crossover because the SUV name, if you’ll forgive the pun, is being dragged through mud.

They think it will be the perfect car for families with a sense of adventure and a good sense of humour.