We’ll see the new M5 soon after the launch of the next-generation BMW 5 Series.

These latest spy photos reveal the look of the new hotshot saloon which proves that the premium marques aren’t deserting the high-performance bracket quite yet.

Not that the engineering boffins in Munich are totally ignoring the environmental crisis sweeping the industry.

The next M5 will drop the V10 engine from today’s model, as it cannot econ-omically pass the stringent emissions regulations in the pipeline for 2011-12.

In its place comes a new V8 engine, based on the 4.4-litre from the latest X6 chameleon crossover.

It will be breathed on by not one, but two turbochargers for touchpaper throttle response.

Expect power to tip in at around 540bhp.

This engine transplant suggests the new M5 will have a subtly different character from the current E60-generation model.

Where today’s model thrives on high revs for its punch, the twin-turbo V8 suggests a lazier, low-down delivery.

Elsewhere, the M5 won’t mess with a winning formula – it will mix executive comfort with supercar- slaying performance, like today’s model pictured behind the newcomer.

Most versions of next year’s new 5 Series will gain BMW’s much-heralded EfficientDynamics fuel-saving tech, but it’s unclear whether the top model will adopt greener know-how, such as stop-start and intelligent alternator control. 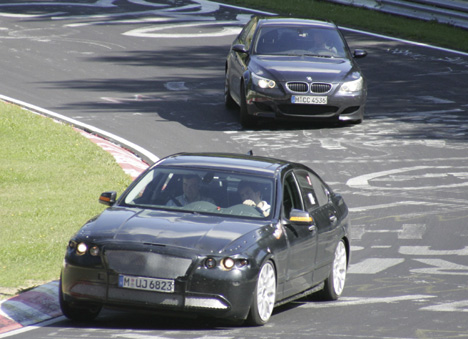