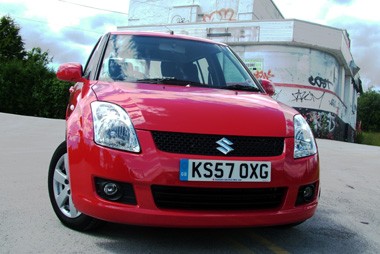 Despite competition in the supermini sector hotting up with the launch of the Seat Ibiza and the all-new Ford Fiesta on the horizon, the Swift is well-placed to fight its corner.

Launched in 2005, it may not have the novelty of being the newest kid on the block but it does have charm by the bucketload – and that will be enough for many customers in this competitive part of the market.

Even sitting in a car park, its cheeky, chunky looks give it a sense of fun, and its appearance doesn’t deceive.

Its nimble handling is reminiscent of the Mini, and for those on a tight budget the Swift would make a more than adequate alternative.

The 1.5-litre engine gives decent performance, although I had been disappointed with the actual mpg recorded over AM’s tenure of the car – 36.7mpg compared to the official combined figure of 46.3mpg.

A number of longer runs has seen an improvement in economy – 40.2mpg over the last tank of petrol – but this is still well below the off- icial figure.

Another negative point is that, against some of the Swift’s newer rivals, it is missing a standard aux-in socket for MP3 players – something which would endear it even more to younger buyers.

But despite these minor complaints, the Swift is an impressive package and continues to win new fans.