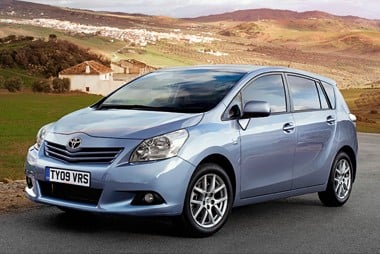 While developing the new Verso, Toyota’s designers visited the car parks of Ikea and Disneyland Europe to ask families what they wanted from their compact people carriers.

Unsurprisingly due to the long-term commitment of raising children, the MPV segment is a loyal sector. Owners hold on to their vehicles for around four years, slightly longer than typical, and Toyota’s research found that 50% of compact people carrier owners choose the same class of vehicle when they make their next purchase.

So, while Toyota’s marketing campaign should bring conquest sales, dealers are expected to mine their customer database and promote the benefits of the new Verso to owners of the old model.

Flexibility, efficiency, safety and improved levels of comfort are the key factors of new Verso. On the first two points, its strengths include reduced costs of ownership, including lower servicing charges and individually- folding rear seats that provide a completely flat floor when folded.

On the comfort front, it offers more space for occupants and has numerous useful storage areas, including one beneath the floor in front of the middle row of seats and a double-level glovebox.
With safety a vital consideration for MPV buyers, Verso aims for a 5-star EuroNCAP rating.

It features stability and hill-start controls as standard and achieves a first-in-class of having third row curtain airbags.

Miguel Fonseca, Toyota GB managing director, said dealers will enjoy a good margin from the model. Old Verso was a predominantly retail purchase – until its run-out Toyota did not put it into the Motability lease scheme where many MPVs are first registered – and Fonseca wants the new version to have similar security from heavy discounting.

Fonseca wants Verso to achieve a similar sales performance as the old model, which peaked at 7,000 annual registrations.

However, the impact of the recession and CO2-linked taxation is driving a decline in the MPV market across Europe, so initial expectations are 4,500 registrations per year.

The car was launched last month with the choice of a 1.8-litre petrol or 2.0-litre diesel, both with improved emissions and fuel consumption over the old Verso.

Later this year a 2.2-litre D-CAT diesel will be added to the range and Toyota GB is considering whether to bring in a five-seat Verso as its entry model, if the market conditions warrant it. It would have a 1.6-litre petrol engine and could be priced as low as £16,000.

In addition, a petrol-electric hybrid Verso is likely in the next decade. However, the diesel variants should account for 70% of sales.

Verso’s level of standard equipment is good. The mid-level TR variant is expected to claim 73% of sales, and comes with Bluetooth, aux-in, leather steering wheel, electric windows, front foglights and 16in alloy wheels on top of the base-spec T2’s CD-player, steering wheel-mounted controls, air-con and a rear 12v power socket.

Nevertheless, dealers could up-sell options such as a protection pack with rear parking sensors or style pack with chrome trim elements.

Toyota says Verso is true to what the term MPV stands for – a multi-purpose vehicle – but does not ask the motorist to make sacrifices where style, comfort, quality and driving pleasure are concerned.

Combining practicality and safety with desirability, the new Verso will appeal to customers who want and expect more than just a functional car.

Motortorque.com - The part SUV styling and versatile seating will appeal as will the very good fuel economy potential. The Verso may not be exciting, but it is fit-for-purpose.

Car magazine - The new 2009 Verso won’t set the world on fire, but it will provide no-nonsense, cleverly thought through people carrying duties for the masses.

Parker’s - The driving experience, which although comfortable, lacks sparkle. But comfort levels are superb and it’s an easy car to drive.

4Car - Instead of reinventing the compact MPV the Verso remains a well-polished traditional choice.