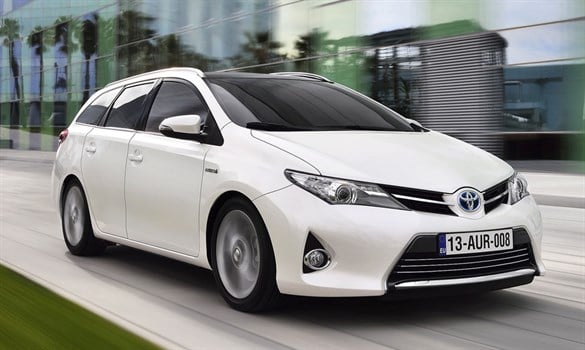 With new vehicle segments often emerging as car makers strive to find differentiators in the marketplace, it is easy to forget those that were at one point motoring mainstays.

The upper medium car – the classic rep-mobile – has, through tightening fuel costs, emission regulations and dilution of segments, increasingly failed to capture the car buyers’ imagination when tickled by compact SUVs, MPVs, compact MPVs, van-derived cars, as well as a host of efficient, cost-effective and visually appealing small cars. And the estate car is sharing a similar fate; perhaps an even harder battle for sales.

Building on the reputation of the Auris hatchback, Toyota has left the front-end alone and extended the body by nearly 30cm to provide one of the largest boot capacities in its class. At 530 litres more than the hatch with seats down and 1,658 litres with seats folded it beats the Kia and Ford competitors, but not the Skoda (1,740 litres).

The boot lip is also 10cm lower than in the hatch, a simple idea that will leave anyone lifting a heavy load into the car’s carpeted cave distinctly appreciative. And what else do you care about when looking at an estate beyond space?

Probably engine performance and efficiency. I drove a hugely capable and smooth 1.6-litre petrol, but there is also a 1.33-litre petrol and 1.4-litre diesel.

However, seizing customers’ imaginations is the hybrid, the 1.8-litre petrol-electric that beats them all on green credentials with CO2 emissions at 85g/km and an official fuel economy of 76.3mpg (in comparison to 139g/km and 47.1mpg for the car on test).

Registrations from launch at the beginning of June were at 351 just ahead of the September plate change. There are 1,500 planned for this year with 4,000 expected for a full year. For the first time in asking a manufacturer for the proportion of sales across model and engine types, a hybrid has led the way. Toyota says its petrol-electric model is accounting for 65% of sales. It is unique in offering a hybrid in this segment and is supporting the technological confidence with a marketing effort to match.

Zero per cent finance has been available on the hybrid range and on certain petrol and diesel versions except the base-grade Active which is at 4.9%.

Throughout August, Toyota ran a ‘trybrid’ campaign promoting its hybrid range: take a test drive, have a free car wash.

What’s been said about the Toyota Auris TS

What Car?
If it weren’t for the disappointing drive, the Auris Touring Sports would be a compelling compact family wagon. It really is one of the most practical and user-friendly estate cars on the market.

Which?
Like all Toyotas, the Auris is easy to drive. It’s steering is fingertip-light, all-round visibility is good and the controls are logically placed. The suspension soaks up bumps, even on those bigger alloys, and the well padded seats are very comfortable.

Toyota is back in sports territory again with its GT86 after six years of solid focus on family vehicles.