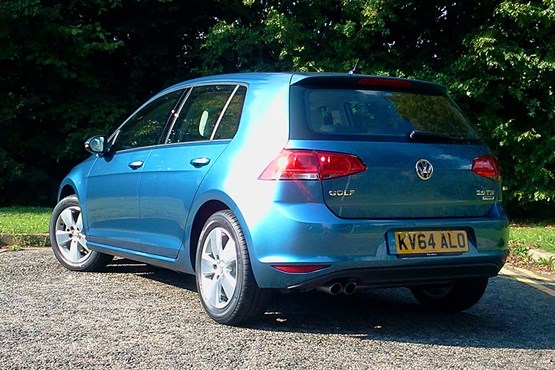 One of the best-selling cars of all time in the global market, the Golf has been recognised for its overall balance and outstanding achievements in safety, fuel efficiency, dynamics and comfort.

In 2013, it was the UK’s fifth most popular new car model range, with 64,951 registrations, accounting for 2.9% of the total market and 33.5% of Volkswagen UK’s annual registrations. Demand has continued strongly in 2014 too, with registrations up to the beginning of September at 45,653, putting it fourth most popular overall this year and second in the C-segment to the Ford Focus. Volkswagen hopes demand will be sustained towards the end of the year through its introduction in September of a feature-packed Golf Match derivative.

September was marked by another exciting occurrence. AM took delivery of a factory-fresh, 64-plate Golf SE for a long-term test, during which we will be examining just what gives this car its crucial saleability for the Volkswagen UK franchised network.

We specified the car using the car configurator on Volkswagen UK’s website. It was an easy process, although helped by our knowledge of current car technology. What was very pleasing to see was that, having made our choices, the configurator allowed us to ‘send to a friend’ or ‘share’ it on social media for that important peer validation during the customer’s research period.

The mid-range SE specification is a popular derivative for retail customers, so it was our model of choice, with a 150hp 2.0-litre turbodiesel with stop-start that ought to make light work of our regular cross-country journeys.

There are plenty of premium-level features in the SE model, including adaptive cruise control, a city emergency braking system, DAB radio, electronic parking brake and colour touchscreen. On top of that, we personalised the car a little with 16in ‘Perth’ alloys, a no-cost option, front and rear parking sensors (£450), a mirror pack comprising electrically foldable door mirrors with puddle lights and reverse-activated rear view adjustment (£95), a panoramic sunroof (£920) and Pacific Blue metallic paint (£535).

In addition, we opted for the touchscreen Discover Navigation system (£750), which includes three years of navigation updates and traffic sign display.

Over the coming months, we’ll report on the Golf’s capabilities and marketing campaigns designed to continue its appeal to UK car buyers.

What’s been said about the Volkswagen Golf SE

The latest Volkswagen Golf is irritatingly good in all of the key areas. In fact, it may be the only car you will ever need.

Given that it will have rock-solid RVs, there’s nothing to stop fleets buying the Golf, safe in the knowledge that not only is it a better car than the one it replaces, but it’s also better than almost every other rival.