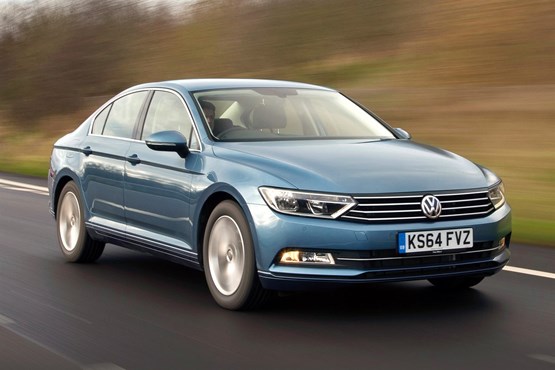 Just as Ford has raised the bar with its new Mondeo, Volkswagen is refusing to be left behind and has been delivering the first units of its eighth-generation Passat to showrooms.

It is an important car for Volkswagen’s success in the company car sector, which accounted for almost 14,000 of the 19,658 previous model Passat saloons and estates registered last year. Only the Golf and Polo perform better for Volkswagen UK in the fleet market, according to SMMT data.

With the new Passat range, Volkswagen is making the unusual move of launching with only diesel engines. All are Euro6-compliant, ranging from a 1.6-litre through a 2.0-litre in low- and high-power formats and on to a range-topping high-performance twin-turbodiesel with four-wheel drive. The decision is driven by the fleet sector’s preference for diesels, despite the recent decline in petrol prices and negative headlines concerning diesel emissions.

That policy will last until quarter four this year, when a tax-friendly plug-in petrol-electric hybrid will be added, badged GTE. Volkswagen says this model will have a range of 621 miles, of which 31 can be achieved in full electric mode.

Five trim levels are offered on the Passat in saloon and estate from launch: S, SE, SE Business, GT and R-Line, with the SE and SE Business lines expected to account for more than 60% of orders. With SE, which is a £1,095 price premium over the basic car that starts at £22,215, buyers gain adaptive cruise control, comfort seats, front and rear parking sensors, a ‘front assist’ collision mitigation system and the ability to switch between five driving modes – normal, comfortable, sporty, individual and eco – using the touchscreen.

However, even the basic S, which may attract a few retail customers to Passat, has a good level of equipment, including DAB digital radio, alloys, colour touchscreen media system, Bluetooth, keyless start and electronic parking brake.

A Volkswagen spokesman said: “The new Passat has more new technology and is a bigger jump between generations than any other Volkswagen.”

Safety systems previously reserved for more premium models are a feature of the new Passat. One is a driver alert system, which monitors driver behaviour for any erratic steering wheel movements and lane deviations and evaluates traffic signals on the road, giving visual and audio warnings if it determines the driver needs to take a break.

While all these systems are in place to lower insurance ratings and to keep the hard-working company car driver safe, the new Passat has other features aimed at supporting their comfort and business. Despite being both shorter and lower than its predecessor, the new Passat’s MQB-based platform boasts an extra 33mm at the wheelbase (all of which appears to have been allocated to rear-seat legroom) and an extra 26mm in headroom.

Its 586-litre boot will swallow one more 40-litre overnight travel case than any of its rivals – the Mondeo’s boot manages 541 litres and Vauxhall’s Insignia takes 530. In estate guise (£1,530 more than the equivalent saloon), the loadspace is so cavernous – 650 litres – that prospective buyers would have to move segment to a Mercedes-Benz E-Class to match it.

Depending on a customer’s individual requirements, the Passat can be set with an annual 10,000-mile service interval or a flexible service interval that leaves the in-car computer to detect when a service is required, typically between 10,000 and 18,000 miles. The latter is tailored particularly to be more convenient for owners covering higher mileages, although could potentially affect Volkswagen dealers’ aftersales earnings.

Some compensation is offered by its optional extras, which will include a head-up display from this summer, and a clever ‘trailer assist’ parking system, which will help a driver reverse anything being towed into whatever space is required through the use of the door mirror adjusters. Both are new technologies for Volkswagen and are expected to be introduced in other cars.

The new Passat proves there is still good value in large family cruisers in a market preoccupied by SUVs and crossovers.

What your customers will be reading about the VW Passat

The Passat is not quite a sector leader in emissions, but it’s close enough on benefit-in-kind not to deter user-choosers. It looks dynamic, a description rarely given to the often-staid previous Passat incarnations. Interior quality levels are high.

The Passat makes sense on many levels. The new styling is sophisticated and sleek, the interior is lovely and incredibly spacious, and it feels like a class act. Move up into the equivalent Audi, BMW or Mercedes and you’ll pay more money for less space and equipment.

Overall, the Passat feels polished and precisely executed. It’s certainly inching closer in general aura and perceived quality to the prestige marques, and this, along with impressive emissions and equipment, makes it one of the best big saloons available as a company or private buy.