Will Citroën's C4 Cactus give the brand a 'mainstream' bump? 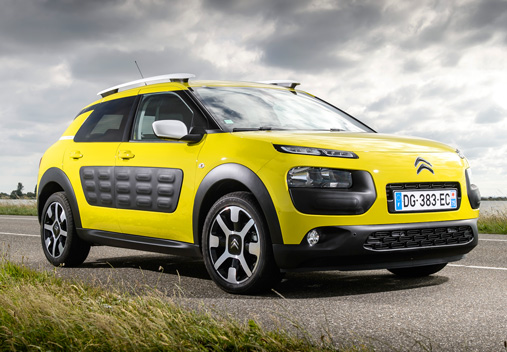 Citroën doesn’t have a crossover or an SUV in its current range and come October, when the C4 Cactus reaches showrooms, that won’t change. Despite the bold styling and those chocolate-chunk-like Airbumps designed to mitigate careless car parking, this car is essentially a compact family hatchback.

However, for Citroën and its dealers it is more important than that. The more upmarket DS range that revived Citroën’s fortunes is becoming a brand in its own right and is getting standalone DS showrooms in some parts of the world.

♦ To see more images of the Citroën C4 Cactus, view our gallery here

In the UK, however, a manufacturer source says the DS will initially have a presence in distinct, branded spaces in existing showrooms so as not to threaten the Citroën UK operation.

With the DS models having established what a more exclusive French car should be, the carmaker decided it was time to redefine what the mainstream C-line cars are about. The C4 Cactus is the first of these new C-line products, which are meant to embody simple and practical mainstream cars.

With the help of some strict weight- and cost-saving decisions (the rear windows pop out as vents rather than open normally, there’s no split-fold rear seat), Citroën claims to have saved 200kg compared with the C4 hatchback.

As a result, in its most basic form the C4 Cactus weighs 965kg, 50kg less than a Fiat Panda. Such savings have been critical in achieving efficiency – the best-performing petrol model (the 1.2-litre PureTech 82) achieves 65.7mpg in the EU official combined test cycle, with CO2 emissions of 98g/km, while the best-performing diesel, the 1.6 BlueHDi 100, gets 91.1mpg on the combined cycle and 82g/km CO2.

Citroën director of marketing communications Julien Montarnal wouldn’t reveal sales expectations, but insisted to AM that this “will be no niche car, but a mainstream car”. The split is predicted to be equal between retail and fleet customers.

The range will start at £12,990, but Citroën has launched the Cactus in France and Spain backed by two finance packages that are a first for the brand – Simply Drive, a menu-based package starting at ¤199 a month that includes standard maintenance and can include tyres and insurance if required; and Flexi Drive, where the buyer makes payments for the car and their insurance payments vary according to how far the car is driven, pay-as-you-go style.

In the two weeks following the C4 Cactus’s launch in France, these packages accounted for more than 50% of orders. Montarnal said it was not yet decided if these would be implemented in the UK.

The C4 Cactus is certainly distinctive, maybe polarising, thanks to its Airbump cushioned panels around the car. These can be specified in one of four colours at present, contrasting with or complementing the car’s paint colour. The plastic panels require no specific maintenance and are designed to resist impacts from supermarket trolleys or other car doors at speeds up to 3mph.

Time will tell whether these will prove a little too wacky for some potential buyers, but they cleverly signal the car’s solutions to everyday problems. Further practicality is found inside the car, where the passenger airbag is mounted in the roof to allow for a large glovebox built into the top of the dashboard. Passenger legroom is also enhanced as a result.

The dashboard layout is quite practical too, although the electric mirror control is hidden behind the steering wheel. Below the central touchscreen display in the dashboard are six function buttons, and crucial information is shown to the driver on another screen directly in front. On versions with an automatic transmission there is no stick, simply D, R and N buttons on the dashboard for drive, reverse and neutral.

On higher-specification Flair models, connectivity features include Citroën e-Touch, which includes emergency calls (to emergency services or breakdown assistance), an eco-driving record and a virtual service book. Citroën Multi-city Connect enables connection to the 3G network, via a special USB drive plugged into the central glovebox, along with real-time access to information and allowing the use of up to 18 apps, including social media.

The C4 Cactus offers something different for buyers interested in a medium-sized, comfort-focused hatchback. Its quirky design and efficient petrol engine helps it stand out in a sector dominated by plain-looking hatches.

What your customers will be reading about the Citroën C4 Cactus

A brave if flawed attempt to offer something different in the family hatchback sector. There’s plenty to like in the cabin, but overall the feeling is of something built down to a price not up to your expectations.

If the new Citroën C4 Cactus doesn’t sell by the boatload, I’ll eat my hat. The newest member of the French maker’s line-up is one of the quirkiest, funkiest and most interesting new cars to go on sale in 2014, yet doesn’t cost a million pounds.