The logistics operators who keep the motor industry moving 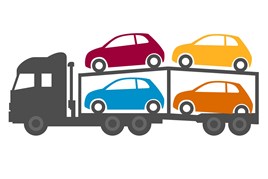 Logistics operators could be seen as the ghosts of the motor retail industry. They keep a low profile and get very little exposure in the press, yet a new car market of 2.6 million units annually (and a used car market  almost three times bigger) would rapidly grind to a halt without them.

It is a very fragmented market, however. Operators range from dozens of small, regional firms with trailers and small transporters through to major nationals with fleets of transporter trucks and other businesses specialising in arranging driven car movements by employees or sub-contractors.

There has been some consolidation in the logistics marketplace, and some innovation too. Remarketing group BCA operates its own fleet of more than 100 transporters and handles more than a million vehicle movements annually. It expanded its logistics business a year ago when it acquired Stobart Automotive, the vehicle movements arm of Eddie Stobart, which operates a fleet of around 450 vehicle transporters. The acquisition expanded BCA’s transport services into new car operations, having previously been centred around de-fleet and auction movements for leasing companies, dealers and manufacturer national sales companies.

Since then BCA has also acquired Paragon Automotive, which handles, processes and stores new vehicles at their point of entry to the UK and at the end of the factory line, as well as providing refurbishment and associated services to the used vehicle marketplace. Its clients include Kia and Volvo. That acquisition has been seen as a further signal of BCA’s intent to provide a full service offering across the automotive sector.

Broadening the services offered is being seen as an important strategy for many of the larger logistics businesses.

Acumen Automotive Logistics secured a contract for the delivery of newly-built Minis from BMW’s Plant Oxford to dealers stretching between Lincolnshire and North Wales. That followed its expansion to a new operating centre in Coventry after winning another contract from Jaguar Land Rover to distribute finished vehicles to dealers throughout the south of England and Wales.

“Every time you move a vehicle it costs money and there’s a potential risk of damage. The least handling in the shortest time ought to be good for the client” John Stocker, GEFCO

GEFCO UK’s client base has included a variety of manufacturers, including Peugeot, Citroën, Ford and Jaguar Land Rover. It has specialised in receiving manufacturers’ new

vehicles from ports and assembly plants, and distributing them to the franchised networks. However the business is seeing growth in vehicle storage, PDI and distribution for major dealer groups, said John Stocker, finished vehicles logistics director.

“There’s a big trend in preparing vehicles at the port of entry, because lots of dealers heavily involved in doing big fleet deals these days have customers nowhere near their dealerships and it’s crazy sending the vehicles around the country twice. We put a programme together with them, where we will bring the vehicle into the UK, stop it at the point of entry, PDI and prepare it, then deliver it to the end user.“

Stocker said this trend has developed over the past three years and has grown 50% in that time. GEFCO is also now providing outsourced PDI for dealerships, including smaller dealers, which ensures the car is delivery-ready to be handed over to the customer. This frees up the dealers’ own workshops for retail work, and is efficient for GEFCO, which has large PDI centres geared up for volume – Stocker said it can PDI hundreds of cars daily. It has also begun offering inventory storage for dealer groups, which can be combined with the PDI services to reduce the strain on their own compounds and forecourts.

Last year GEFCO moved around 560,000 cars, including a mix of new car movements for dealers and transporting vehicles to end users, through driven movements and car transporters. Clients are able to use the global company’s NOMAD IT portal and a GEFCO Max app to track vehicles in the process.

“We’ve had cars picked up 20 minutes after they have been put on the system because it’s come through to a driver nearby on his iPad. You could never do that with a conventional contracted transport firm” Daren Jones, Movex

Stocker believes streamlining the vehicle logistics process for dealers will bring dividends. “Every time you move a vehicle it costs money and there’s a potential risk of damage. The least handling in the shortest time ought to be good for the client.”

The nature of motor retail means that franchised dealers frequently need single vehicles moved quickly, perhaps to rebalance the used car stock on a different forecourt within the group or to deliver a vehicle to a distant buyer.

Here, trade-plate drivers often bring an advantage in terms of cost and convenience. Midlands-based Pro-Driver has more than 90 self-employed drivers on its books who complement the drivers it employs to operate its own fleet of 24 professionally branded transporters. The business provides a 24/7 service and those drivers typically require one day’s notice of their next job. Pro-Driver’s commercial director Neil Lakin said that because they operate multiple jobs postcode to postcode, the client is not paying for the return journey.

Pro-Driver moves around 1,000 cars for dealers each week, with jobs ranging from corporate client deliveries to stock collections and dealer-to-dealer trade car transfers, including an inspection for cosmetic damage. Its administration team is able to trace the location of the car at any point via the driver’s PDA, monitoring each driver’s schedule and when the car is collected and delivered.

Awareness of the costs of vehicle transport led to another recent innovation. Movex is a vehicle logistics platform that allows dealers to put details of a job online and have it go to a network of more than 500 transport companies, who can then quote for the job.

“Many dealers, including Lookers and Sytner, use us for transfers, inbound and outbound, and delivery to customers,” said founder and managing director Daren Jones. The advantage is ease of use, cost savings and potentially very quick lead times.

“We’ve had cars picked up 20 minutes after they have been put on the system because it’s come through to a driver nearby on his iPad. You could never do that with a conventional contracted transport firm.”

Jones said dealers start to use the company, which was bought by auction group Manheim in 2015, because their own driver isn’t available, then don’t stop. He believes it’s because it works out cheaper and dealers don’t have to worry about insurance or drivers’ expenses.

Movex also has a ‘backload’ system, where if a transport company has an empty vehicle returning from somewhere, they can see if there’s anything they can pick up on the way home.