Was this article useful?
15 people found this useful
7 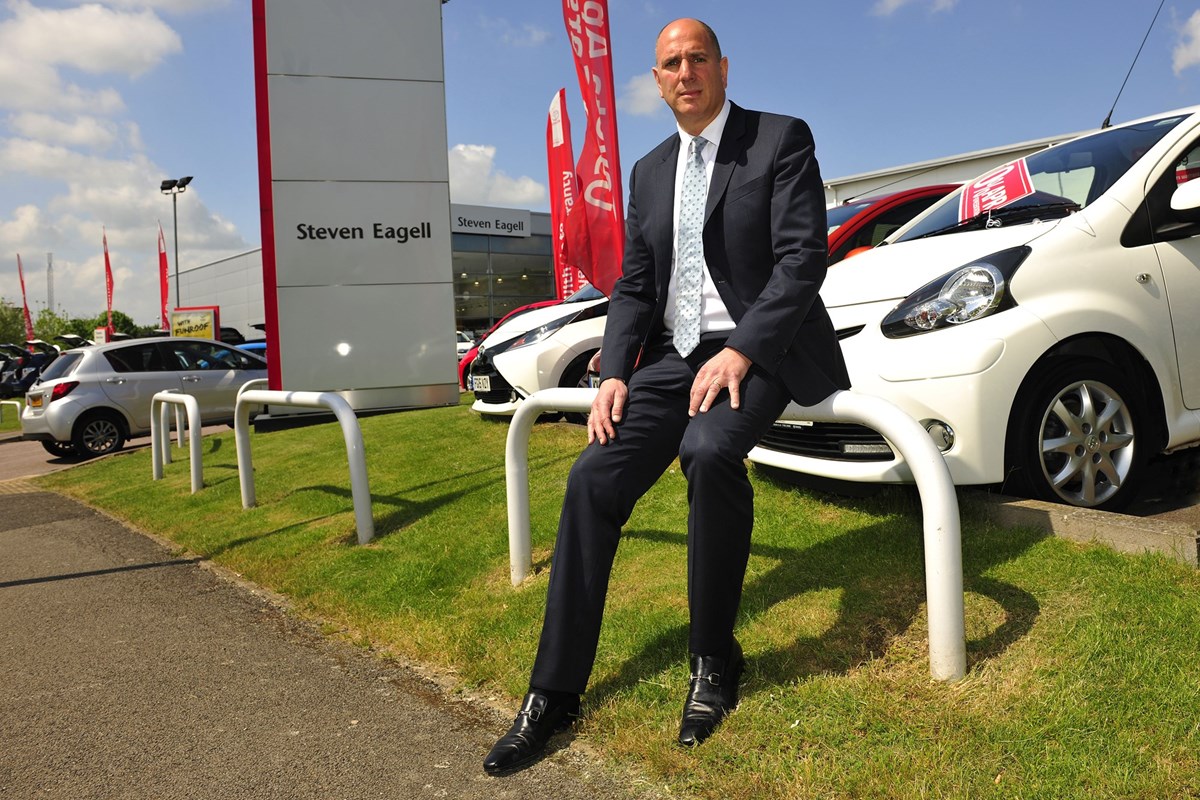 Like a football manager trying to find the right mix in his team, Steven Eagell is recruiting a squad of young talent to drive forward his business in a changing automotive retail sector.

Keen to move away from an aging and potentially transient sales staff workforce, the managing director of the Steven Eagell group has earmarked recruitment as one of his top priorities as he aims to “mould” his team to sell the “Steven Eagell way”.

“We recruit on attitude and enthusiasm rather than experience,” said Eagell. “In fact, we like to recruit people who have not worked in the industry before, so that we can mould them into the Steven Eagell way of doing things.

“Having a young, enthusiastic team has lots of benefits and one of the key factors is low attrition. We have a lot of pride in retaining our customers as an industry, but the same should apply to our workforce. The two things should go hand-in-hand.”

After becoming his own boss via Toyota’s sponsored dealer scheme, Eagell knows how he wants things to be done and, so far, it has been hard to question his techniques.

Profitability is on the rise, with 2.7% RoS achieved at the group’s headquarters in Milton Keynes and the Aylesbury operation leading the march with a 3% score.

Profitability and turnover are key targets for the limited company, with a group average RoS of 3% and £200m turnover within its sights, according to its annual accounts, to be achieved through “a combination of organic growth and expansion”.

Despite the growth, Eagell still sees himself as the single site manager of his early career and is keen to keep his feet on the ground and, increasingly, on the road between his 11 sites.

“We have centralised the business as much as we possibly can, we see ourselves as one dealership with 11 locations rather than 11 separate dealerships.”

“I always wanted to own my own dealership,” he said.

After working his way through the ranks, he found himself operating businesses for Camden Motor Holdings before signing up to Toyota’s sponsored dealer scheme.

Eagell had just over 15 years’ industry experience when he remortgaged his home to contribute to the deal that saw him become owner of the former CD Bramall Toyota dealership in Bletchley.

That initial loan was paid back in seven years, but an ongoing relationship with Toyota Financial Services has led to further financing as the Steven Eagell business grows.

In 2004, the Bletchley operation moved to a new, purpose-built facility in Milton Keynes and a second dealership was bought, this time a long-vacant site in Luton.

Eagell conceded: “My initial intention wasn’t to grow it quite as rapidly. It was Toyota’s view that I should grow one market area.

“I then bought Aylesbury from Inchcape in 2005 and we had to relocate that as well. In 2004/05, we went from one dealership to four quite quickly. There really was a difference between running a dealership and running a business and I had to adapt to that very quickly.

“I brought some good people with me and I was aware that I needed to expand, because in the early days it was quite top-heavy in terms of senior management.

“That was intentional, because I was obviously looking longer term and I really wanted to grow the business with our own people.”

Finding and developing the right people

Just as he himself has risen from through the ranks, Eagell is keen to see his own team progress within the business.

His philosophy of recruiting young, enthusiastic staff is backed up by training provided both through Toyota and a specialist training provider, Martec Europe. The group wrote its own 10-step sales process, in which Martec trains all new starters.

The group hosts recruitment days where it can select from the brightest applicants, before training new staff in every element of the sales process, from answering initial phone calls and emails to the final handover.

Eagell said that, as well as boosting staff’s early chances of success, the process helps to eliminate instances of staff taking on unnecessary tasks. Each knows their role.

Ongoing training and development has also resulted in a level of staff retention above the industry norm.

“Every one of our managers across the group – we have 393 staff, including 42 line managers – has been promoted through the company,” said Eagell.

“We have an average length of service among our managers of 10 years.

“We’re not a hire-and-fire business. We want people to come here and grow.

“What we’ve ended up with is a real culture of people who have been with us for a long time, who really do understand our business and our culture.”

Eagell said the training processes not only subscribe to FCA compliance rules, but attempt to ensure a clear path to good customer service.

While he does not want to see the system “stifle entrepreneurial flair”, Eagell hoped it would cut out unnecessary tasks and help to promote an efficient, customer-centric service.

Steven Eagell’s training programme also facilitated a move away from business managers, with the group preferring to appoint additional sales staff, as it considers the finance offering an integral part of the sales process.

Sales managers sit among the sales staff, meanwhile, and while an iPad-based DMS system has yet to reach the showroom floor, all back-office processes are now paperless as moves continue towards the streamlining of sales and administration processes.

It is not only staff that Steven Eagell aims to retain. The group is also driving hard at its aim of realising the potential of its “customer for life” philosophy, backed by a robust database, strong PCP sales and a keen eye on customer satisfaction results.

An in-house call centre at Milton Keynes is staffed by a team of 16, who make more than 6,000 service bookings a month and make 3,000 outgoing calls, using DMS data.

Staff are also trained to sell tyres and service packages and Eagell said the results have been positive.

“It’s another thing that helps free up the sales staff to sell cars. Without the call centre, there would be phones ringing in the showroom and that only detracts from the personal service that we aim to offer.” 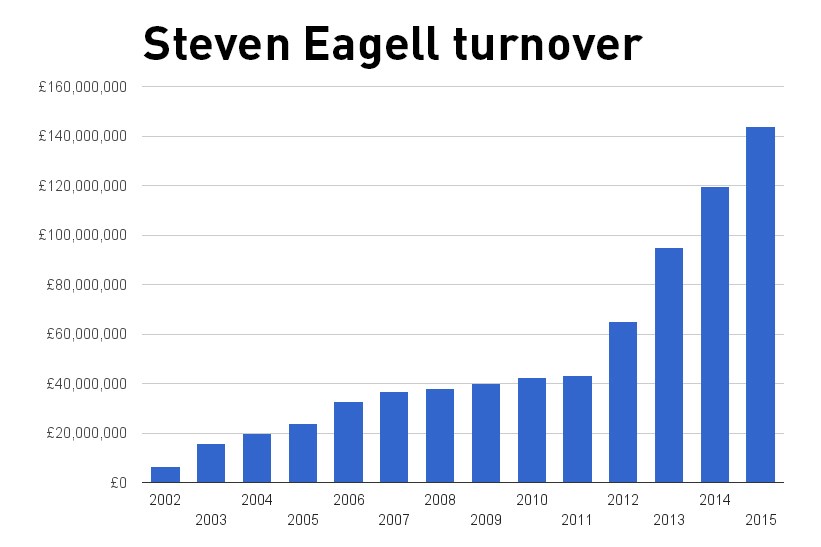 The Access Toyota PCP offer has facilitated 94% of the group’s retail sales over the past 12 months and Eagell said the result has been 53% back-to-back retention.

The average turnaround for PCP customers across the group is 20 months.

Eagell said: “We’re really not looking for a quick sale. Every customer that comes to us we want to trap them for life, so every PCP product , we push service plans and insurance products, everything we can to retain those customers.

“What we really have to focus on is giving excellent service to maximise every opportunity of retaining them.

“We’re fairly aggressive in terms of farming our own database, but in a sense we are too reliant on database. We need to be bringing more customers in and grow more conquest customers from the outside.”

Toyota’s big car launch of 2017 is likely to be the CH-R, which enters the growing C-segment SUV sector in the summer.

While not yet able to take advantage of customers’ appetite for a small crossover vehicle, Eagell is content that Toyota is the market leader when it comes to hybrids.

Eagell said: “Hybrid entered the market 20 years ago and look at it now. Yaris represented 34% of group sales in 2015 and around a third of those were hybrid. Auris was even more. About 80% of our 1,000 Auris sales last year were hybrid.”

However, Eagell is eager to see Toyota expand its range of products.

“If you look at last year, 73% of the vehicles we sold on the retail side were one of three vehicles: Aygo, Yaris and Auris. That’s great, but it does suggest that we could certainly do better and grow our sales in other areas.”

The group has a specialist business centre in each of the five market areas it trades in and fleet accounts for about 26% of the network’s total registrations.

A Milton Keynes site that was bursting at the seams with vehicles when AM visited is testament to the fact that used cars accounted for about 6,000 sales last year – resulting in a new to used ratio of 1:1.2.

About 100 used vehicles of all makes pack the forecourt and Eagell said he likes a busy site, even if it may mean diluting the Toyota content.

“We see used cars as a great opportunity for conquest sales because it brings different people onto the forecourt and there is always a chance that they might go on to buy a new car.”

“Last year, 73% of the vehicles we sold on the retail side were one of three vehicles: Aygo, Yaris and Auris” Steven Eagell

Asked whether he planned to “dilute” the group’s purely Toyota offering with the introduction of another franchise in future, Eagell was a little more apprehensive.

After conceding that he would like to add the premium Lexus brand to his company’s portfolio, he added: “If we were to expand with another manufacturer, we would discuss the situation first with Toyota because we wouldn’t want to jeopardise the relationship we have with them. It’s extremely important to us.”

The Toyota Retail Concept corporate identity (CI) has been introduced across all but three of its existing sites and the two new sites acquired from Marshalls, but Eagell said the move amounted to “more of a refresh” and had not demanded large financial resources.

With the consistently brisk pace of the group’s growth in recent years, what developments are likely to occur in the coming months and year, then?

As monthly appraisals of every site in the group grow ever more demanding of the managing director’s time, it seems his hands-on approach will require a re-think if its market area grows any further in geographic terms.

Eagell is keen to continue playing to his strengths. He said: “The monthly appraisals were obviously easier when there were five or six sites, not 11. It has become a little more complicated, but I think it’s really important because that gives you the discipline to ensure that you regularly visit each location.

“The most important thing about any new acquisitions has to be profitability, but we don’t want to lose sight of the quality of service we provide for our customers either.

“We would love to continue to grow, but we are quite focused on growing in a strategic and geographic way. We don’t set ourselves growth targets and we don’t want to grow just for the sake of growing.”