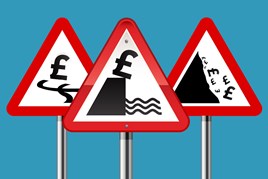 To misquote a former prime minister, franchised motor dealers have never had it so good as they have since the recession ended.

Ultra-low borrowing costs and easy availability of credit have helped fuel record car registrations, but there are warning signs that the era of free-spending consumers and easy finance is coming to an end.

Almost a decade on from the financial crisis that brought the global economy to its knees and left British businesses and consumers feeling battered and bruised, the UK car market has been booming.

The Society of Motor Manufacturers and Traders (SMMT) reported the strongest March on record, with 562,337 new cars registered, a year-on-year increase of 8.4%.

One reason for the industry’s success is its ingenuity in developing and offering attractive finance products, from straightforward loans to personal contract purchase (PCP) deals.

The Finance & Leasing Association (FLA) reported that in the year to March, point-of-sale finance accounted for 86.5% of new car sales to private buyers among its members, bubbling just under the record level achieved in 2016, and amounting to £31.9 billion of dealership finance.

Another reason car sales have been so buoyant is consumers and businesses alike have benefited from benign economic conditions as the UK has enjoyed slow but stable growth, low inflation, historic low interest rates and low unemployment.

Low rates have not only enabled car dealers to keep down APRs, but poor returns on savings accounts have encouraged people to splash out rather than save. Some £26 billion of PPI compensation over the past six years has also encouraged spending (the deadline for claims is 2019), as did the scrappage scheme.

Fears of a post-EU referendum recession failed to materialise, but there is mounting evidence that the tide is turning, bringing the risk that consumers and businesses, including car dealers and finance houses, will be left exposed.

Average real wages are down 0.2% in the first three months of the year, the first fall in two-and-a-half years, after inflation hit 2.7% in April.

The increase in inflation, largely driven by the sharp fall in the value of the pound since the referendum, is eating into household budgets and business costs. The National Institute of Economic and Social Research (NIESR) sees inflation peaking at about 4% this year.

And those record registrations in March were followed by an almost 20% fall in April’s year-on-year figures, reportedly exacerbated by the decision to bring purchases forward to avoid the new VED regime.

Household savings rates were at their lowest on record in the final quarter of 2016, suggesting consumers may be spending capital and reluctant to take on more debt.

Although the unemployment rate is its lowest since 1975, the NIESR has predicted it will rise this year as uncertain businesses delay hiring. The housing market, so crucial to consumer confidence, is also showing signs of stagnation, according to the Royal Institution of Chartered Surveyors and lenders Halifax and Nationwide.

Commenting on those headwinds, Mike Allen, head of research at Zeus Capital, said: “The market has had a great run in the last four, five, six years, but it is a cyclical industry and we think it will get more difficult in the next couple of quarters.”

Allen is sceptical about the impact of PPI on car sales and does not believe the claims deadline will make much difference to the market.

Louise Wallis, head of business management for the National Franchised Dealers Association (NFDA), said: “I think most people are predicting the rest of the year will be a tougher market to operate in

and car sales will level off or see a slight decline. I don’t think anyone is predicting a major problem.”

The Bank of England (BoE) was so nervous after the Brexit vote that it halved its base rate to 0.25%, which has undoubtedly bolstered borrowing. Although the BoE maintained the rate in May, the US Federal Reserve has begun raising its key rate and, according to Bloomberg, markets expect UK rates to rise to 0.75% by 2019, though Capital Economics forecasts them rising to 1.25% in 2019.

Even if rates rise soon, there would be no impact on existing fixed-rate APR deals.  Wallis said: “Any rise in rates is likely to be quite small and the effect on borrowing costs would not be huge in the short

to medium term. Nobody is expecting a return to the bad old days of double-digit interest rates.”

Adrian Dally, head of motor finance at the FLA, said base rates were only one factor in setting APR rates: “The other factor is competition and one reason there is such a low APR environment is that there is a lot of competition and that remains a downward driver.”

Brexit has brought uncertainty not just for consumers, but also for carmakers, who are wrestling with what it may mean for imports of vehicles and components.

The SMMT has estimated new car prices could rise by £1,500 if the UK fails to secure tariff-free trade deals, while PA Consulting has put the figure at £2,372.

Such an increase, coupled with the possibility that Brexit may push up the cost of insurance if foreign insurers retreat from the UK, will dampen demand.

That would squeeze manufacturers’ profits, as would major swings in exchange rates against which they have not hedged. The result could be a reduced willingness to support attractive finance deals, such as zero-interest offers, and instead turn to dealers to plug some of the gap.

Allen said manufacturers and dealers would have to keep fickle motorists happy: “To keep the momentum going, deals are going to have to remain very compelling or consumers might switch into used cars.”

Customers have eagerly bought into the idea of leasing cars and PCP penetration is far higher in the UK than Europe, accounting for 90% of new registrations at some dealers (a NextContinent report in 2016 said 60% of cars sold in France were financed).

Makers and dealers like PCPs because they lock customers into a cycle of replacing their vehicles every three or four years. If market conditions shift, they can flex the size of deposits required and interest rates to maintain buyers’ interest.

Nervous buyers may be tempted to switch to loans, possibly from high street banks or other lenders, and then hold on to their vehicle until they feel secure enough to change it.

Wallis said: “Manufacturers want to sell cars and will make sure there are ways of making them affordable for consumers to buy them.”

But what if instead of a gentle slowdown, the economy comes to a juddering halt? Perhaps the biggest cloud hanging over the sector is the concern that a sharp downturn could leave customers unable to keep up repayments or choosing to make the balloon payment and keep their existing car for longer.

The Bank of England says the car industry plays an important part in the stability of the economy and that PCP has been good in stimulating sales. However, it warns that it intensifies the automotive industry’s

cyclicality and because manufacturers bear the risk of falling used car prices, it leaves the industry exposed to economic shocks.

At the extreme, the fear is that the rise in PCP has created a credit bubble, which, were it to burst, would have dangerous consequences not just for car buyers and the industry, but the broader financial system.

Andrew Evans, fund manager at Schroders, has called car finance a “warning light” that is “flashing most insistently”.

It is causing concern in the US, where there are worries about subprime car loans packaged into bonds and sold on, prompting credit ratings agencies to warn of stress in the system, though not on the same scale as the sub-prime mortgage crisis that triggered the 2008 crash.

On this side of the Atlantic, consumer campaigner and former pensions minister Baroness Altmann has said: “Households that have big mortgages, overdrafts, loans and car finance repayments could be left in an unsustainable position, particularly when interest rates rise.”

The Bank of England has voiced its own worries. In April, it highlighted the risk from rapid growth in consumer credit and noted that the fastest area of growth was in dealership car finance.

The Financial Conduct Authority (FCA) has signalled it may be about to get a lot tougher and weed out firms that fail to carry out stringent affordability checks.

In its business plan published in April, the FCA warned it was concerned about “a lack of transparency, potential conflicts of interest and irresponsible lending” in motor finance. It will carry out a review of who uses the products, the sales process, due diligence by providers and whether they cause harm.

Anthony Howitt, director at Consumer Credit Advisory Services, said: “We are going to see much stricter supervision and fines imposed for poor conduct and breaches of the regulations.”

A key principle of the FCA is “treating customers fairly” and if it means some vulnerable customers are unable to get dealership finance, the regulator will see it as a job well done.

The flipside is that those firms that align conduct and culture with good customer outcomes and regulatory requirements should see benefits for their brand, sales and profits.

Dally said: “We strongly believe there is very effective and strong competition in the motor finance sector. It works in the interests of consumers and we would expect the FCA to find that.”

Dealers and finance providers that fail to meet FCA standards risk costly enforcement action. The alternative is to walk away from what has been a profitable part of the business and lose it to other lenders.

Larger companies are typically better-placed to understand their regulatory requirements and put the processes in place to ensure compliance. But even small companies can seek external advice and make use of existing training tools such as the FLA’s Specialist Automotive Finance (SAF) test and the ‘SAF advanced’ qualification. Approval is expected shortly for a new motor finance specialist apprenticeship.

Howitt said “For a small, family-run dealership that awards finance three or four times a year, perhaps they can afford to lose business to the banks, but for any business of scale or with aspirations of scale, it is imperative they take steps now to address their requirements.”

What would cast a cloud over the sector is an FCA decision to refer it to the Competition and Markets Authority for a full investigation.

Consumers already feeling the pinch from a tougher economy could be spooked by the bad publicity and shy away from PCP deals, as may cautious independent dealers.

There are many risks ahead, some facing all businesses and consumers, and some specific to motor retail.

On their own and provided any economic slowdown is contained, the effects are likely to be limited, but if they come together in a perfect storm, consumers and dealers face a rough ride.