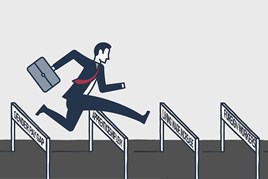 Even aside from the legal uncertainties that still surround Brexit, UK dealers face a barrage of  employment legislation changes this year that will require businesses to act quickly in Q1 to remain compliant.

Group HR and compliance teams will be under pressure to make sure reporting systems are set up ready for the following changes in what is the busiest period of the year for franchised dealers.

Businesses with more than 250 employees will be required to publish the average pay gap between men and women from April 5, 2017.

The new rules will require them to publish the figures on their website and submit evidence of compliance each year. There will be a 12-month window for  affected businesses to submit data.

The lack of women in senior roles in the UK’s motor retail industry is likely to accentuate the gap in average pay.

According to the latest Annual Survey of Hours and Earnings from the Office for National Statistics (ONS), the average gap in pay between men and women for all full-time employees was 9.4% in 2016, compared with 9.6% in 2015. It is currently at the lowest level since the ONS started recording the figure in 1997. The ONS did not look at the automotive sector specifically, but in retail and wholesale, the average gap for managers and directors was 21.2% in 2016.

Employers will be required to keep their gender pay figures online  for three years to show what progress is being made.

The Government has yet to set out how it will approach enforcement.

Ed Steele, managing director at automotive recruitment specialist Steele Dixon, said: “There is a real lack of awareness about having to report this.”

While average pay figures are likely to be higher for men due to the industry being male-dominated, Steele said he had not seen pay being offered at different levels for roles based on gender.

Rachael Monfredi, Swansway Group HR director, was an employment lawyer before joining the motor retail industry and gender pay gap reporting has been on her radar for a while.

She said: “There is a 12-month window to submit data and our HR system is set up in such a way that this will probably take a couple of days to pull the data, but it should be relatively simple.”

Swansway’s HR system stores data such as gender, age and pay across its business, but Monfredi said it may be difficult for smaller dealers without that sort of access to information digitally.

Roxanne Bradley, Lawgistics legal adviser, said the Government will also build a website to which all gender pay reports must be uploaded.

She said: “Before this is implemented, dealers could look at updating any policies to help address any gender pay gaps, such as flexible working, people development and enhanced paternity leave and equal shared parental leave entitlement.”

From April 6 this year, businesses with annual payroll costs of £3 million or more will pay 0.5% of their annual payroll bill, minus an allowance of £15,000, towards the Government’s apprenticeship levy.

Following feedback from industry, dealer groups will have 24 months, rather than the initially announced 12 months, to ‘use it or lose it’.

“The feedback we got when we said we wanted to create a motorcycle technician standard was ‘it’s just a car with two wheels’ ” Steve Nash, IMI

Steve Nash, chief executive of the Institute of the Motor Industry (IMI), said: “I sat down with a dozen HR directors at the main dealer groups in the UK recently and their knowledge of how this would all work, particularly in relation to how to access funds, is incredibly poor.

“That’s not a criticism of them, it’s a reflection in how badly communicated the details around the levy have been.”

Nash said the cynical view is that the Government is banking on dealer groups accepting the levy as a tax, due to how difficult it will be for them to use all the funds generated from it.

He said: “The Government doesn’t want to fund any shortfall on apprenticeship monies for companies that aren’t big enough to contribute into the levy, they’re hoping the overflow from these other large dealer groups will pay for it.”

Dealer groups can claim for levy funding against approved apprenticeship standards. The Government wants the development of job role standards to be driven by employers.

Nash said: “We are already having to work really hard to get these standards accepted. The Government doesn’t want hundreds of standards and it’s difficult to convince them there is a difference between a motor retail executive and a generic sales apprenticeship standard.

“The actual feedback we got when we said we wanted to create a motorcycle technician standard was ‘it’s just a car with two wheels’.

“This is the level of understanding we’re having to deal with.”

The Government introduced a mandatory National Living Wage of £7.20 on April 1, 2016, for all employees over 25. This mandatory minimum wage will increase by 4.1% on April 1 this year to £7.50. Increases are planned on the same date every year.

The penalties can be severe, with non-payment resulting in the employer being fined 200% of the amount owed, unless the arrears are paid within 14 days.

HM Revenue & Customs (HMRC) can take employers to court for not paying the mandatory minimum. The maximum fine for non-payment will be £20,000 per worker. Employers can also be banned from being a company director for up to 15 years.

Of the 198 businesses named, six were related to the automotive industry, but none was a franchised dealer.

Swansway has a dedicated person working on the payroll system at its head office and part of their job role is to keep an eye on any position that pays close to the living wage to make sure it is increased each year.

Monfredi said: “There are drivers, valeters and cleaners that may sit close to that, but there are very few people directly employed by us that will be close to that level of pay.”

She said all suppliers are given a contract to sign to say they are expected to comply with the latest employment legislation, including areas such as meeting minimum wage requirements and complying with the Modern Slavery Act.

The Modern Slavery Act has been in force since March 26, 2015, and was introduced in an attempt to stop people being forced to work, often for extremely low or no wages.

Bradley said dealers need to make sure they publish a statement on the company’s website for each financial year to cover the steps the company has taken to ensure slavery and human trafficking is not taking place within it or its supply chain.

Martin Peters, Autoclenz sales director, said his company’s compliance process included looking at driving licences and passports to make sure operators are allowed to work in the UK (required under the Immigration, Asylum and Nationality Act 2006). He said more than 30% of applications for new operators failed the checks.

He said: “This ‘grey’ labour promotes lower rates with no questions asked, but the risks that go with this option far outweigh any potential short-term gains.”

Bradley said: “The jail term can be up to five years and the fine is unlimited if you are found guilty to have employed an applicant which you knew did not have the right to work in the UK.

“If you employ an applicant which does not have the right to work and you failed to carry out the correct checks then you can be penalised which could lead to a civil fine of up to £20,000 for each worker.”

Peters said the first conviction under the Modern Slavery Act was delivered in January 2016, with a company director at a factory in West Yorkshire sentenced to 27 months in prison for knowingly engaging a supplier who was using illegal labour on less than minimum wage.

He said: “The significance is that it was not just the supplier who was brought to justice, but also the director, who should have been aware the level of pricing could not support minimum wage.”

Peters advised dealers to ask their suppliers to provide documentation proof for each operator.