AM investigates: Can anything break car maker's shift to EV crossovers? 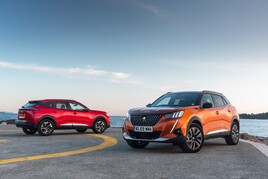 As manufacturer strategies focus increasingly on electric vehicles (EV), crossovers and SUVs, is customer choice set to become a thing of the past?

At first sight, the new car market appears to be fragmenting like never before: hybrids, plug-in hybrids, battery electric, even the odd fuel-cell model – the choice seems almost endless.

While it is true that there are more alternative propulsion systems than ever before (or at least since the early days of the motor car when buyers could choose between steam, petrol and electric), it is not true of the size and shape of cars.

Today, the B- and C-segments (superminis and family cars respectively) take an unprecedented 67.8% of the market.

It is difficult to imagine now, but when Nissan and Toyota set up their factories in the UK, they both only made D-segment (VW Passat sized) models here. B-, C- and D-segment cars each took about 25% of the market, so it made sense to concentrate on the more profitable D-segment (larger cars tend to mean larger profits).

Since then, C-segment cars like the Golf have grown in size to take over as mainstream family cars. 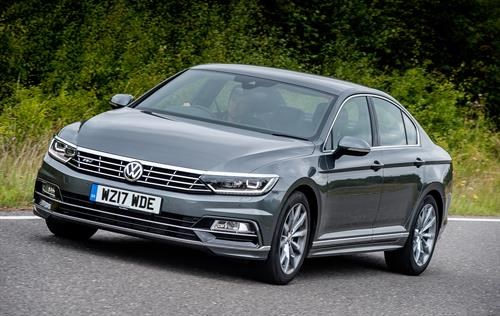 Buyers who need a bit more space now choose a C-segment crossover (e.g. VW Tiguan), rather than moving up to a Passat.

Similarly, superminis have grown a bit larger, so they are more practical as family cars.

As with the C- segment, buyers who need just a bit more space than a Fiesta can move into crossovers like the Ford Puma.

Of course, this raises the question of why the city car (or A) segment has not grown as well – if cars in the higher segments are larger, should there not be a market for cars which have stayed the size of a 1990s’ supermini?

No case for EV superminis

City cars have wafer-thin margins – they cost almost as much as a supermini to make, but have to be sold for less.

An electrified Ford Ka, for example, would be too expensive, so manufacturers are largely abandoning the segment. 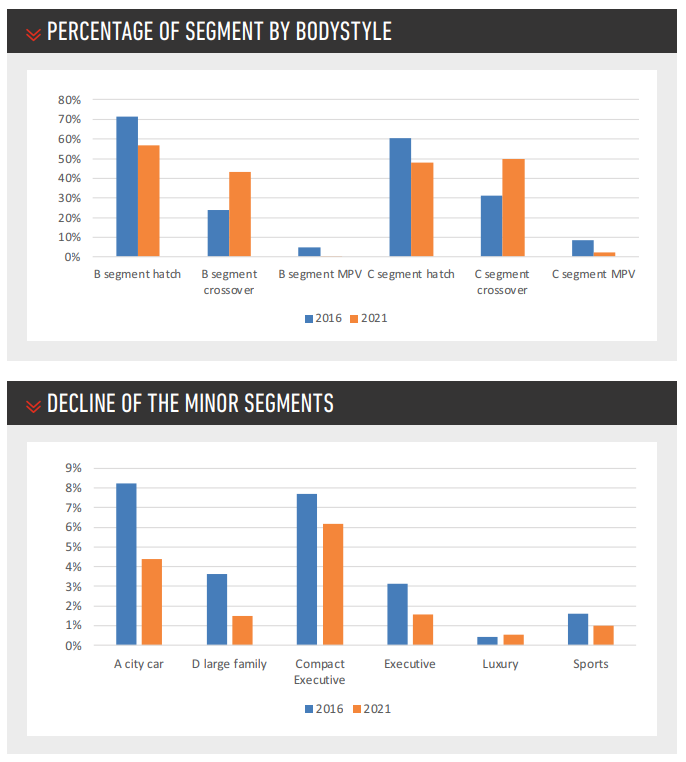 Toyota is making a brave stab at re-inventing the city car with the new Aygo X, but it is too early to tell what effect it will have.

The best-selling C-segment crossover was, unsurprisingly, the Nissan Qashqai – the car that invented the concept.

Kia also took fourth place with the Niro, making Kia the leading manufacturer in the segment.

With the exception of VW, this is not a happy hunting ground for European brands: Ford was in seventh place with the Kuga, and Peugeot was 10th with the 3008.

Among C-segment hatchbacks, there was a new winner.

For the first time, Mercedes-Benz took segment leadership with the A-Class: it has come a very long way since the first unstable, badly-made A-Class wobbled on to British roads in 1998.

In second place was the evergreen Golf and in third was the Audi A3. Not only does that mean a German lock-out, but it demonstrates the apparently everlasting growth of premium brands.

When the A-Class and A3 were first designed, it would have been inconceivable that they could eventually overtake mainstream models like the Focus (now fourth).

The only non-premium brand with something to celebrate is Toyota, whose Corolla is in fifth place – a big improvement on the performance of the lacklustre Auris.

In the B segment, the pace of change has been more moderate.

Within the crossover sub-segment, the Ford Puma is the clear leader, selling in excess of 40% more than the second-placed Nissan Juke.

The Puma was Ford’s only segment leader last year – clearly it was prioritised for scarce microchips ahead of the less profitable Fiesta.

Ford even managed to shift more than 5,000 units of the lame, dated Ecosport. The Ecosport provided a kind of dividing line – if a model cannot outsell the Ecosport, a car that has effectively been replaced, it is not doing very well.

In that category falls the Citroën C3 Aircross, which was intended to be a mainstream competitor.

The worst performer of all is a related model – the DS3 Crossback which was even outsold by the largely forgotten Fiat 500X.

A decade ago, the DS3 hatch was competing with the Mini to be the most fashionable car in the B-segment.

Replacing the successful DS3 hatch with a crossover must have seemed a no-brainer, but the result has been closer to a no-hoper. 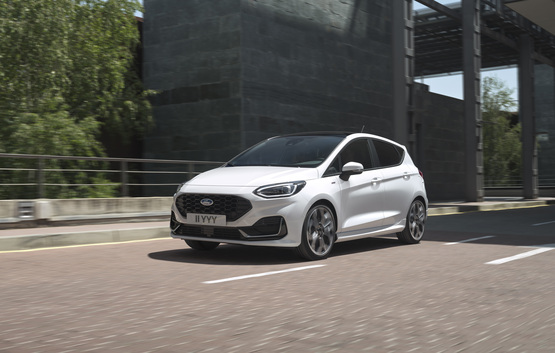 Among supermini hatches, the big news is not so much the winner (Corsa) as the loser (Fiesta).

The Ford dropped to fifth – its lowest-ever position.

While it is likely to recover somewhat as the microchip shortage eases, it is most unlikely to recover the top spot – the newer (and much newer-looking Corsa) is probably secure for the immediate future.

Premium models are less in evidence in this segment, but the Mini (second place) and the Audi A1 (eighth) are not letting the volume brands have it all their own way.

Over the coming few years, it is hard to see what would stop the growth in these two segments.

Few people need anything bigger than a C-segment car and buyers will struggle to find many cars smaller than B-segment models.

Alternative body styles like small coupés and MPVs appear to be dead rather than resting.

The car industry is notoriously unpredictable, but the type of car we will be driving in five years’ time looks inevitable – a battery-electric small-to-medium crossover.

Some will hope that something turns up to disrupt that apparently inexorable trend.