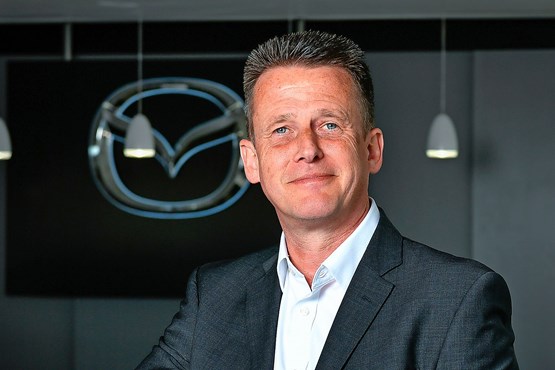 If “strong and stable leadership” is the hallmark of a successful operation, then Mazda UK managing director Jeremy Thomson is an example to the industry.

Having spent 14 years within Mazda UK, nine of those in his current role, the former Ford sales and marketing man has been at the helm of the brand’s UK business since the depths of the 2008 recession. Its aftermath led the exchange rate to tumble from JPY240 to the pound to JPY120 and, by 2012, sales of 50,000 Mazdas fell to 25,000.

When AM caught up with him on the eve of the general election, Thomson was all too aware of the headwinds once again prevailing, but his relationship with his dealers and customers does not seem to feature among them.

Fresh from his receipt of an award for Outstanding Leadership at the 2017 Autocar Awards, and with the brand having secured the Manufacturer of the Year trophy at the AM Awards 2017, Thomson’s commitment seems to be reaping rewards. Mazda UK was also the top volume brand in the JD Power Survey’s Customer Service Index and a creditable sixth overall in the standings of NFDA’s Winter Dealer Attitude Survey – its best result in 25 years.

Thomson is keen to see the long-rumoured prospect of a free trade deal between Japan and the UK realised as a result of Brexit negotiations. Currency fluctuations remain the main headache for a brand which imports its entire range – all but the Thailand-built CX-3 enter the UK from Japan.

But, despite a mixed start to the year, he appears to have placed the brand on a solid footing with its recent move to a purpose-built headquarters in Dartford, which brought customer advice operations in-house, and the completion of a £12 million CI upgrade of the 132-strong dealer network, by April.

Why Mazda is in it for the long term

Thomson said that the new CI had been designed to be “impactful” but also “cost efficient” and in the NFDA survey dealers gave Mazda a 7.5 score for the “cost required to meet franchised standards” – well above the average 5.5.

“Through the tough times we have deliberately held back from making CI changes and I think the last time it happened would have been 15 years ago. Smaller brands can’t make unreasonable demands,” said Thomson.

Thomson suggested that his long-term relationship with the brand and the operators of its UK retailers – around a third of which are solus operators – also had something to do with the affordability of the make-over. He said: “I’ve been in this position since 2008, the last financial crisis, whereas some manufacturer MDs change every 18 months to two years, and there seems to be a new corporate identity with each one.

“I need to stand by the things I ask the brand to do over a number of years. That requires a very different discipline to the way you treat your network in terms of accountability.”

Thomson and his management team travel around the UK every six months for “informal and open” meetings with dealers which seem to have paid dividends. The 67 dealers who responded to the NFDA survey scored the brand 8.3 when asked how their manufacturer takes dealers’ views and opinions into account against an average 5.9.

Paying such close attention to the dealer network’s opinions and concerns may add pressure at a time when volumes are levelling off and margins slimming.

Mazda dealers are currently achieving an average 1.1% RoS, which is in line with the industry average but “not good enough”, Thomson admits.

“We’d aspire to make that better and scale would certainly help,” he said.

“We took targets down in May, recognising that it was a rather unexpected downturn in the run-up to the election.

“It’s always been my opinion that an unrealistic target becomes a switch-off point. An achievable target will get your network really firing on all cylinders.”

Thomson suggested that the decline was partly because Mazda UK was “running out of cars and completely out of daily rental” and had also reduced its presence in Motability.

The brand is keen to encourage retailers to embrace the profit potential of aftersales and used cars, both areas it has struggled to support.

Mazda currently feeds 1,000 used cars into its dealer network each year via a closed online auction. Thomson said: “We need much more because that really is the dealerships’ bread and butter.”

One area where Thomson admits that mistakes were made in the past was in the provision of parts.

Following the 2008 recession, Mazda took the decision to dispense with its UK parts warehouse in a bid to cut costs, instead supplying everything directly from Belgium.

Dealers and customers were left waiting several days for parts in some cases, and issues with the Channel Tunnel – including a fire and the immigration crisis at Calais – galvanised Thomson’s desire to return to the old system.

He said: “In April last year I made a huge investment and put a new warehouse back in the UK in a place called Crick, near Northampton.

“Now dealers get overnight deliveries again. We righted what was a wrong in hindsight, but 2008 was a period of really critical decisions that we had to make.”

The move to Dartford, with a new 25,000 sq-ft headquarters at Crossways Business Park, has helped to drive forward Mazda UK’s bid to make customer service a key area of appeal.

Handling 10,000 incoming and outgoing calls each month, the new set-up has seen the 20-strong team improve the first-time call resolution rate from 35% to 68%.

Call handlers’ affinity for the brand is key to the results, according to Thomson, with loyalty boosted by a company car scheme that sees all Mazda UK’s 200 staff driving a vehicle of their choice.

Thomson also has a real affinity with his new team and sees some of Mazda’s future managerial talent among the company’s new recruits.

He said: “I started work in exactly the same role when I joined Ford in 1989. For me it’s come full circle and I’m looking back to that first, nervous step that I made into the automotive industry as a psychology graduate out of university, not knowing anything about the brand.”

Mazda’s bid to be a champion of customer service is being pushed into dealerships via ‘Experience and Retail’, a “cultural change” programme reaching more than 800 people across 23 venues.

Supported by consultants in the dealership paid for by Mazda, the programme sees dealer sales and service teams receive training at the new HQ. A margin element focuses on customer experience using dealers’ Net Promoter Score.

Thomson said: “That’s the first time we have rewarded customer experience to this extent. It’s three or four times what it was in previous years.”

While there are no immediate plans to make the difficult decision of introducing direct online sales, Mazda UK has innovated in its approach to sales with delivery of Mazda MyWay.

Running since July 2015, the programme has 10 “brand champions”, which respond to test-drive requests made online at mazdamyway.co.uk, delivering

vehicles direct to customers from a demonstrator stock based in Purfleet, near the new Dartford HQ.

Currently operating in London, MyWay is supported by seven dealerships located around the M25, who receive leads when a customer decides that they want to buy.

Thomson revealed that there had been no staff turnover among the fully salaried staff since they were whittled down from 1,000 applicants 18 months ago, and the 230 sales to date had “made a dent” in the cost of the project. He hopes to see it rolled out to other parts of the UK.

He said: “The showroom will always be important but thinking that the showroom is always going to be the centre of gravity for the sales process is a mistake.

“Customers want to come to showrooms, our research definitively shows that, but when you are a brand that 98% of people aren’t currently choosing. you need to actively reach out to them and you need to do something exceptional. Just waiting for them to come to you is not enough. There’s a place for direct online sales too, and one hopes that may well be something that Mazda has as well.

“Some customers are absolutely convinced of what they want, they’re used to online purchasing, so why would we stand in the way of that?

“But I think it misses so many opportunities to give customers a brand experience. We’ve given them a transactional experience, but not a brand one, so I’m not pushing that as a priority.”

New Mazda products and the shape of things to come

Mazda has just launched a new CX-5 SUV and next year will bring the first of a seventh-generation of vehicles into showrooms.

The new product will feature SkyActiv2 technology, a development of the SkyActiv model which saw weight cut and normally-aspirated engines honed in the pursuit of greater efficiency – shunning the trend for down-sized, turbocharged engines and hybrid technology.

New chassis, engines and drivetrains are among the SkyActiv2 package and Mazda appears to have softened its stance on AFVs.

Jeremy Thomson said: “In 2019 we’ll launch an EV globally and we’re looking at the potential of a PHEV in 2021. In addition to that, while some commentators think that diesel is dead, we think it has a long way to go, in particular the new Euro 6 diesel, and Mazda has been quite lucky or opportunistic, and clever, in that we’ve always believed in high capacity diesel engines.

“I think a lot of manufacturers have now said that it’s the end of the downsizing era in response to the changes in the NEDC testing regime with WLTP, which would not favour the down-sized engines.”

Thomson admits new product “still excites us, it’s what we live for.” He added: “Many of our dealers will remember when we brought out RX-8 in 2005 and over two years we sold double the number of cars we expected. Most of the dealers were taking full up retail margin on them. That worked incredibly well then and I think cars like RF and future models will provide a lot of opportunity.”