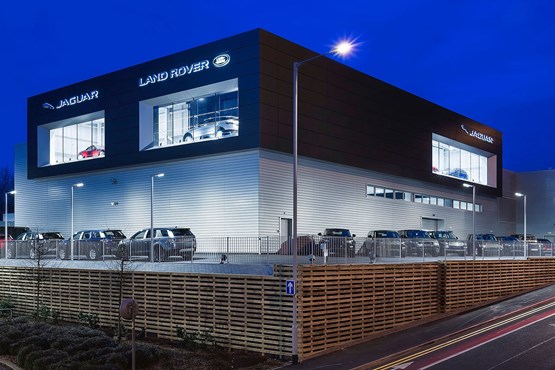 "This is the quickest that a total network re-think has been carried out by any manufacturer for the size and scale of what we want to achieve.”

Jaguar Land Rover (JLR) is on a journey that will affect almost every site in its retail network by the end of 2018. Now two years into the project, network development manager Sarah Nelmes is in no doubt about the scale of the task.

By the end of the process, JLR will have a total network of 138 sites, most of them dual-brand ‘Arch’ dealerships, with 35 franchised partners (falling from 41 in 2014). JLR said it will have 98 Jaguar franchise points and 125 Land Rover points, an increase of 15 and 10, respectively, over its 2014 network totals.

Each partner will invest between £2 million and £15m implementing JLR’s dual-brand ‘Arch’ concept as part of a network-wide investment of £1 billion.

The plan has seen JLR choose not to renew some franchisees’ contracts, in line with its desire to have Jaguar and Land Rover operations owned by the same individual or group in towns and cities across the UK.

The plan’s reception among dealers has definitely been softened by impressive growth in registrations by both brands  as well as the prospect of new products such as the Jaguar XE, F-Pace and Land Rover Discovery Sport.

Of the two brands, Jaguar has farther to rise. While Land Rover has been a highly profitable franchise for at least three years, JLR managing director Jeremy Hicks told AM that the average Jaguar dealer lost money in 2015. 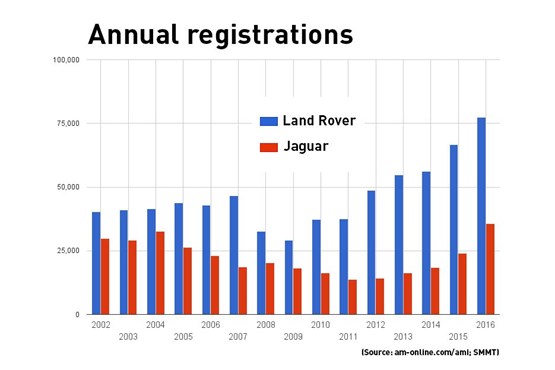 However, JLR as a whole has enjoyed six consecutive years of registrations growth since its acquisition by Indian conglomerate Tata in 2008. It has invested £12bn in infrastructure and research and development at the same time as expanding its global workforce from about 15,000 to 40,000. In fact, the pace of growth has been so rapid that its £500m Wolverhampton engine manufacturing plant, which opened in 2014, is currently undergoing a £500m extension.

An instant sales success, 100,000 XE saloons were registered in the six months following its launch last April, claiming a 20% share of a segment featuring the BMW 3 Series, Audi A4 and Mercedes-Benz C-Class.

Launched earlier this year, Jaguar’s first SUV is likely to be its biggest seller globally. Hicks said: “It will be the brand that introduces a lot of markets to the Jaguar brand.”

Launched in 2014 as the successor to the Freelander, 1,597 of the seven-seat family SUVs were registered in June.

More than half-a-million Evoques have been sold, in more than 180 countries, since 2011. Land Rover’s most efficient model, it manages CO2 emissions of 109g/km and a claimed fuel efficiency of 68mpg.

Hicks said: “In the first half of 2016, we have already sold more Jaguars than we sold in the entire year of 2013 and Land Rover is growing too, up 10% as well.

He added: “We sat down three years ago and developed our growth plan. It was clear from the start that the numbers would have to back up the investment that we were asking for from our network partners.

“People had to believe in us as a management team, but I can stand in front of the retailers now and say that everything we said we’d deliver we have delivered.”

Nelmes said: “We needed to have a corporate identity that was relevant to our brands, that was premium, very distinctive, contemporary and corporate, but the strategy was also about bringing common ownership together in the same towns and I’m pleased to say that we are at the end of that phase now.”

The Arch concept and its progress

To date, a total of 10 Arch dealerships have been completed, 30 are currently being built, 23 of which will be completed by the end of the year.

Among the key features of an Arch site, as described by Nelmes, is a site sectioned into a 50:50 split of Jaguar and Land Rover, with a central reception desk.

Indoor service areas allow customers to deliver their cars in an indoor environment and staff use CitNow eVHC to monitor the vehicle on arrival and also film any work carried out.

Nelmes said JLR has not been “dogmatic” about the ‘two brands under one roof’ approach: “We started with Plymouth at the end of 2014, where we created an Arch Jaguar business and that really allowed us to analyse the initial strengths and weaknesses.

“The first retailer after that was Land Rover in Battersea, where we were comfortable to roll out our new corporate identity. In both those cases, we are talking about separate Jaguar and Land Rover businesses.

“We are comfortable where it’s appropriate that they are businesses in their own right. That’s where they have enough land for the facility, where they have been represented in the same place for a long time.”

The first dealership to fully realise JLR’s single-roof Arch concept ideal was Sytner’s Guy Salmon facility off the M60 in Stockport in December 2014.

In May, AM reported on Caffyns’ disposal of its only Lewes Land Rover dealership to Harwoods as part of JLR’s plan to partner with a single owner in each market area. The deal completed a month before Caffyns’ five-year franchise agreement with JLR expired. TH White also left the network in 2015 when its only Land Rover outlet was taken over by Cambria Automobiles.

Nelmes said: “At the moment, we are in the midst of our network development. We’ll end up with a total of 138 sites, but this does represent 223 franchise points, 85 of those are planned to be joint sites, with 40 Land Rover single sites and 13 Jaguar.”

Nelmes said JLR franchise partners developed a five-year business plan, which was vetted by JLR to ensure site investments were viable, but no guaranteed return on investment was settled upon.

Franchisees’ views on the restructure seem mixed. NFDA Dealer Attitude Survey results for both brands were two points higher in 2013 than today.

Planning ahead for VR and EVs

All new Arch dealerships have been future-proofed to accommodate new products scheduled up to 2020.

Hicks said “huge wiring conduits” had been included in each building in anticipation of the introduction of a new range of hybrids and electric vehicles (EVs).

He also explained that technology was starting to play a key role in both the selling of cars and the tracking of leads within the retail operation.

“It was clear the numbers would have to back up the investment we were asking for from our network partners” Jeremy Hicks, managing director, JLR

JLR employed virtual reality (VR) to launch the F-Type and F-Pace and Discovery Sport in showrooms – with reports that orders were placed on the back of 360-degree virtual tours – and recently launched a series of VR videos as part of its sponsorship of Wimbledon with Jaguar ‘ambassador’ and eventual championship winner Andy Murray.

Hicks said VR could be central to a change in the make-up of certain retail sites.

He said the mix of JLR sites could include larger dealerships with greater visibility, “grey box” facilities that offer servicing away from the main dealer, and smaller urban stores.

“Retailers like our showroom on Mayfair could certainly make greater use of technology like virtual reality to give customers a view of the whole range despite their limited scale.”

Where JLR is looking for growth

Hicks said “there are opportunities” for a handful of new Jaguar businesses, but the focus on profitability remains, especially given the tough years that some dealers in the network have had to endure in recent times.

Spelling out his profit expectations for JLR’s retail outlets, Hicks said: “Over a three-year period, we expect the business to be generating satisfactory returns; £750,000 for Land Rover and £500,000 for Jaguar each year. That’s the right zone.”

In addition to growing registrations and adding hybrids and EVs to its ranges, JLR is also attempting to strengthen its used car and aftersales operations. 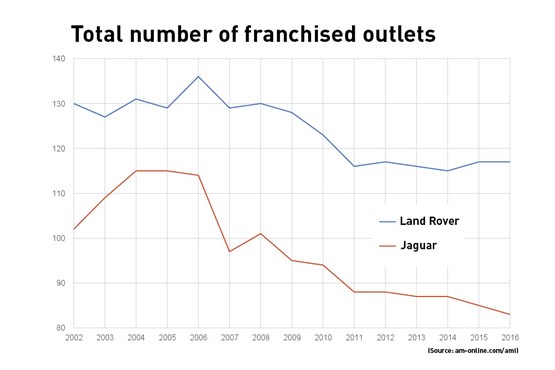 It introduced a two-year warranty on used cars last year along with guaranteed multi-point checks for approved used vehicles and roadside assistance.

While used sales are a growing area of opportunity for retailers, record results in the fleet sector have left Hicks in no doubt of the effect of the introduction of the two-litre turbodiesel Ingenium engine.

Hicks said the growth was the result of a retail plan that was “set in stone” more than three years ago. He said: “We sat down three years ago and developed our growth plan. That drove the requirement for 50 fleet specialists.”

The Range Rover Evoque took a greater share of the UK fleet sector in Q1 than premium rivals, said Hicks, adding that one-in-six registrations of the new Jaguar F-Pace SUV – the best-selling Jaguar ever – will go to the fleet sector.

Jon Wackett, JLR general manager for fleet and business, said: “We’ve really disrupted a market that has been traditionally dominated by three or four brands.”

‘There’s a lot happening at JLR at the moment’

Because eight out of 10 vehicles produced in the UK by JLR are currently exported, the brand will open a third factory outside its home territory in 2018.

The facility in Slovakia will follow a £1bn factory opened in China in late 2014 and a plant currently being built in Brazil.

A £7.5m Jaguar Land Rover Classic centre, developed nearby, will offer sales and support for owners of the brands’ vintage vehicles.

JLR also plans to create a fleet of more than 100 research vehicles over the next four years, to develop and test a wide range of connected and autonomous vehicle (CAV) technologies.

The first of these research cars will be driven on a new 41-mile test route around its facilities in Coventry and Solihull later this year.

The initial tests will involve vehicle-to-vehicle and vehicle-to-infrastructure communications technologies, which will allow cars to talk to each other and roadside signs, overhead gantries and traffic lights.

Despite the developments, however, Hicks and Nelmes remain focused on driving the future success of the core retail business and are encouraging each site to appoint an apprentice a year and employ fairer, less commission-reliant salaries, as part of plans to staff it with the right people.

Nelmes said: “Our aim is to draw people into the business earlier, to give training and bring them up to a standard that makes them want to stay within the business. We want to offer young people a career rather than just a job.”

Hicks said: “Getting away from this low basic, high commission structure is something that I really want to drive.

“We had a retailer conference in March and I addressed the network about that, but this is not something that we are going to say ‘you will’ about. I’d much rather we set them on the road and they arrived at their own conclusion than a ‘we’re doing what Jeremy said’ conclusion.

“There’s a lot happening at JLR at the moment, but having the right retail network and the right staff in place lies at the heart of everything we need in order to continue to prosper.”