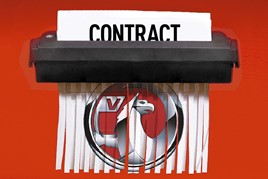 Vauxhall has terminated all of its 326 franchise contracts  in the UK as part of a complete refranchising programme, which will include new standards, new bonus structures and an increased focus on digital retailing.

AM reported last month that a third of the current Vauxhall dealer network was likely to disappear. Many franchisees are barely making money and the brand’s new car market share has been in steady decline, from 12.2% in 2010 to 9.3% in 2016. Following its acquisition by France’s PSA Group in March 2017, its share has dropped to below 8%.

Before this issue went to press, Stephen Norman, Vauxhall’s managing director, called AM to confirm that its dealer network would indeed be reshaped and that all current contracts were being cancelled. He denied reports that about 100 sales points were to go, the number given to AM by dealer sources, calling talk of such a large reduction “pure speculation”.

However, Norman refused to  specify exactly how many dealerships he would shed in the restructuring,  despite some dealers telling AM that they were already aware if they were getting the new contract.

He said: “It’s much more mandated by the ability of a retail dealer, whatever its size and location, to be profitable and to satisfy customers – and the two are inextricably linked – than it is by somebody with a map and a template deciding we need dealers here and there.

The current number three network, Volkswagen, has about 8% market share and 188 dealerships.

Norman also downplayed the risk to jobs as a result of the restructuring, telling The Daily Telegraph that staff would not lose their jobs as a “direct result” of Vauxhall’s decision.

Yet, in an admission that Vauxhall dealership jobs are indeed likely to be lost, he then suggested that affected people “will find work in other franchises” and “perhaps with other dealers”.

Norman said the plan entails issuing of new, identical contracts to a restructured Vauxhall and Opel dealer network across Europe “for reasons of equality”. He and two fellow directors phoned every

Vauxhall dealer partner on April 16 to inform them that their franchise contract’s two-year notice of cancellation will begin on April 30 of this year and end on April 30, 2020.

“Then we would propose new dealer contracts with those partners with whom we saw a stable economic future,” he said.

AM understands that some key sales points struggling to remain viable are likely to be granted to other operators that are already running other sites profitably. This could allow some of the bigger AM100 groups to increase their representation.

Norman said the Vauxhall dealer network was profitable for quarter one this year and for 2017 – dealers informed AM that average return on sales was 0.34% – but conceded that “the amounts being made are, in our opinion, insufficient” and Vauxhall needed to protect the profitability of the franchise.

Vauxhall said the new contracts will include changes to the remuneration process for dealers and introduce new standards to better reflect the changing market, as consumers do more research online.

The carmaker said the contracts aim to “ensure working together is simpler, quicker and more innovative, ultimately benefiting our customers”.

Norman said the drop in Vauxhall’s market share reflected the difference in the commercial policies of General Motors (GM), its previous owner, and PSA.

Under GM, Vauxhall chased market share and pushed new car volume to artificial levels, even if new car sales were heavily discounted and provided slim margins, or were loss-making. In 2016, an AM100 dealer group with Vauxhall franchises told AM it had more than £1 million worth of pre-registrations on its books due to a bonus structure that made the

business unviable unless it beat its volume target.

PSA said it bought Vauxhall/Opel with a desire to make it profitable and sustainable, and has implemented its PACE! Plan to improve efficiency in every area of the business, including reducing the levels of high-cost business it did in the past.

Norman said that from August 1, the anniversary of the introduction of PSA’s commercial plan, Vauxhall’s market share will be more stable. However, he declined to share what level he expected this to be.

“It will be up to me and the dealers to prove that we have the right strategy for it to slowly increase,” he said.

Norman is calling all dealer partners together on May 1 for a ‘Strategy First’ conference, at which he will talk about his vision for the motor retail industry and for the Vauxhall brand over the next five years, one significant aspect of which will be online sales.

“Nearly 100% of customers today go online to check their future purchase and a very significant proportion of them are actually going to the dealership with the vehicle pre-configured,” he said.

“It’s part-physical, part-digital, so there are very few purchases today that haven’t at least started online. Of course, that is going to have an effect. By 2020-2035, we expect there will be a greater proportion of online sales.”

Norman said even in a future where customers buy online and go to dealers just for delivery, it still won’t be a case of wiping out one distribution system for another. He said he believes there will always be a role for dealers, particularly in the aftersales sector and the security of connected vehicles.

The response from Vauxhall dealers

Robert Forrester, the chief executive of Vertu Motors, said it is imperative for the manufacturer and retailers that PSA can create a business capable of  generating enough cash to create exciting new products and have a dealer network that is sustainable and highly profitable.

“From my discussions with Vauxhall, I understand that’s their aim. As a retailer with a substantial Vauxhall portfolio, that’s very important to hear. You can’t be a successful retailer if you have a manufacturer that has successively lost money – it’s not a long-term proposition.

“In terms of our Vauxhall businesses, I’m highly confident from my discussions with Vauxhall that those new contracts will come through. We’re probably helped by being in large territories with large dealerships and we have a good track record of delivering a great customer experience and high volume. I’m not concerned, and neither should anyone be in our Vauxhall dealerships.

“Obviously it’s very upsetting and disappointing if you have had a long-term relationship with Vauxhall and are unlucky enough to not have the contract. I sympathise with those in that position.

“If you are a remaining Vauxhall dealer, though, you should have far more confidence about your future profitability and sustainability as a result of the changes. This has worked before – not many years ago, Renault did something not dissimilar and secured the long-term sustainability of that network.”

Simon MacConachie, the managing director of  Sherwoods Group, which has Vauxhall dealerships in Darlington, Stockton and Northallerton, told the Northern Echo newspaper that 2017 had been a tough year, which has already led to cost- cutting and redundancies at the group. But by the end of Q1, he said Sherwoods made four times the profit it made in 2017, and all branches make a “valuable contribution”, so he did not expect any to close.

He added: “I suspect that any Vauxhall dealerships who are loss-making or just breaking even will be looking over their shoulders right now.”

One Vauxhall franchisee in the AM100 told AM: “Short-term, there will be difficulties, but long-term it is right to do. We all know that digitalisation will mean we need less bricks and more clicks.

“It is difficult and unpleasant for many people, but I think Vauxhall has done this quite sympathetically – they’ve given two years’ notice. If you’re on the receiving end of bad news, you may not think that, but it’s like making redundancies – for the sake of the wider business you have to do it.”

• In December 2011, Renault UK issued termination notices to a third of its 190-dealer network, to improve the viability of those that remained. Renault’s share of the UK new car market had slipped from a 7.6% peak in 2002 to below 3% in 2011, and about half of its network was running at a loss. Renault UK had been unprofitable since 2007, Thierry Sybord, its then managing director, told AM. The desire was to secure a minimum new car throughput of 400 units per location, and within three years the network’s average profitability had climbed to 1.2%.

• In 2009, Citroen issued two-year termination notices to its complete network, to safeguard profitability, as its market share had dropped to 3.6% from 5.1% in 2002. It aimed to remove between 20 and 40 of its 204 sales locations, granting new contracts to selected partners, to ensure fewer dealers shared the profits. There are now 185 dealerships in its network, but its market share has not improved.

• In 2000, Daimler Chrysler UK (DCUK) issued 12-month termination notices to its entire Mercedes-Benz dealer network, as it restructured its network into 24 market areas, with a single partner operating several dealerships within each defined area. It said the action followed UK price reductions forced on it by the Consumers’ Association’s ‘rip-off Britain’ campaign, which highlighted that cars were being sold cheaper elsewhere in the EU, and the action was based on the needs of customers and what was right for the brand. The action led to the dealer association lodging a High Court challenge, but DCUK and the dealers reached a compensation agreement on the eve of the hearing, reportedly of between one and two years’ profits.