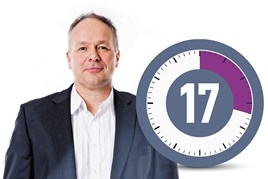 AM: You started work at Auto Trader just more than three years ago. What did you find when you started and how have things progressed since?

Trevor Mather: Before Auto Trader, I ran my own global IT and software consulting business (ThoughtWorks). It was doing very well and took me all over the world. I recall being about to board a flight when I got a call to see if I might consider the role at Auto Trader. It crossed my mind that I am from Manchester, I have a family to think about, and it just felt like the right time.

It soon became apparent that I had done the right thing. Auto Trader is an excellent company and one that, despite being around for so long and being an established market leader, really does embrace change. Change is one of my speciality areas.

I think there had been about 1,200 people working for Auto Trader. Now we have a very talented team of about 850 and about half of those are new recruits. It really has been a period of transition, but we were in a position where we were able to look after those who went – which was very good – and the new team is working well.

AM: Auto Trader recorded turnover of £281.6 million (up 10.5% year-on-year) and operating profit of £169.6m (up 27% YoY) in its annual results to March 27, 2016. CarGurus says profit in the UK is not an issue as it targets greater exposure, but has Auto Trader’s IPO in March 2015 placed undue pressure on it to produce financial growth?

Trevor Mather: Not at all. Auto Trader was owned by a private equity company long before the IPO happened.

It is up to CarGurus how they deal with their shareholders. We are there to make sure our dealers get the best possible leads.

Just look at what dealers have spent on classified advertising over the years. The figure was £600m back in 2005 and it is now £400m.

Retailers used to spend their money on the regional press and magazines and that spending has now come to digital.

That much of that change is down to Auto Trader, with much of that investment coming in our direction, is not something we are embarrassed about.

I don’t think there has been any change in the way we treat our customers since the IPO.

AM: What is the most important thing to Auto Trader as a company?

Trevor Mather: I have just returned from our public company roadshow across Europe and the US. No matter where we are, the most important thing we do as a company is bring retailers a sizeable audience interested in buying cars.

Over the past six months, our car platform stats are up 30%. That is a significant rise and something we are proud of.

It is four times the increase of our competitors and from a page impressions point of view we are the 12th most-visited website in the UK.

In terms of time spent on our site, Auto Trader’s is five times that of our competitors’ and results in 250m ad views each month. That’s 96 virtual views of cars every second of every day over a six-month period. More views equal more sales for our customers.

From a stock perspective, we currently have more than 500,000 cars on our website, which is the most in living memory.

That reflects the seasonal high at this time of year, but also the size of our car parc growth.

That also reflects an increased penetration of retailers on our site. We believe we have 85% of retailers, though it is hard at the bottom end of the market to get the numbers absolutely right.

AM: CarGurus, Motors.co.uk, RAC Cars – there are a few newer entrants to the market. Who do you see as your biggest rival?

Trevor Mather: There is not one particular rival that we are worried about. The main thing is to focus on our own operation.

In terms of CarGurus, clearly what they have done in the US is take advantage of some nice product features and grow audience and build a consumer-facing proposition. two or three things they do very well and dealer reviews are one of them. We have launched dealer reviews and now have 200,000 on the site.

has flags to say whether a car is a good price or a poor price and we have introduced a similar system.

We can be influenced, not just if we see something on CarGurus, but more generally we make sure that we keep on adapting, so consumers and dealers do not have to go anywhere else.

When we see things being introduced elsewhere then why wouldn’t we introduce them ourselves and hopefully improve upon them?

AM: We have spoken about Auto Trader’s desire to evolve to cater for the needs of consumers and retailers. What other changes will we see in 2017?

Trevor Mather: Used car finance at the dealers is currently between 25% and 30%. New car finance is about 86%. If you look at the rise of car finance-focused lenders, they will do a secured loan before a customer arrives at the dealers. They are taking share and opportunity away from the dealers.

We are trying to move that back to the dealers and are encouraging dealers to submit their best finance example to us so that we can add a representative monthly payment on each advert, with a monthly payment search function to follow.

We have heard rumours that Auto Trader intends to offer its own finance solution, but that will not happen. We have zero intention to have finance on our balance sheet.

So far, we have rolled out the finance function to 500 dealers and it will be a free function until 2018.

The launch of our part-ex guide has been designed to solve the customer pain point of ‘what price might I get?’ Our solution attempts to bring more cars to the dealers. Currently, we’ve got 67% of dealers part-ex guide.

Finally, we have launched the new car listing function, with 12,000 ‘virtual vehicles’ currently available through the search.

We provide experts’ and owners’ reviews and give consumers the option of which dealer they would like to deal with. We will also be offering a new car finance search in the new year.

Some manufacturers have indicated they will embrace it (the new car search), but some have been opposed, especially premium brands with longer lead times, which do not need extra leads.

Perhaps the biggest question still remaining is who should pay for those new car leads. There’s definitely a suggestion that it should be the manufacturers.

AM: Moving into 2017, a year that may see new car registration figures fall by up to 10%, and further down the line, what do you see as the biggest threat to Auto Trader?

Trevor Mather: The used car market operates a little behind the new market and that can insulate us from any immediate impact, but I don’t see doom and gloom in the coming year. We’ve heard a lot about a reduction in car ownership due to car-sharing services and autonomous car technology, but I think those sorts of changes are some way off. All the regulation associated with that will take a number of years to finalise.

Direct sales are the biggest threat to us and to dealers in the shorter term. Cutting the dealer out of the equation to such an extent would reduce their requirement to advertise and would surely impact us. That is the worst-case scenario.

The main thing for us is, if that direct sales model gains more traction, we have to be there, making ourselves available to the manufacturers and dealers, to facilitate that.

AM: What do you anticipate will be the effects of the EU referendum result on the automotive sector?

Trevor Mather: There has been no discernible impact from Brexit on our business up to now.

We look at our audience numbers, dealer numbers and stock numbers, we look at consumer confidence and used car transactions and they are all at record high rates.

We see used car prices as being very strong. They are 9% up on our site, but we are getting newer cars and slightly larger cars because petrol is cheaper.

We look at stock turn and that is pretty consistent for where it should be. Look at all these things and you will say there has been no discernible impact.

There may well be a rush to do business over the next two years.

Any restrictions on immigration and the like will be triggered after we leave the EU and I suspect there might be a growth in the population until that time.

Much of our economy is services-based and we might be servicing ourselves, but such a large population guarantees a certain amount of growth.