Are there tangible benefits of a diverse workforce? 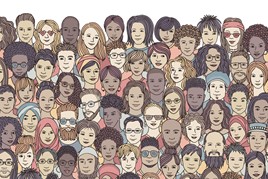 Every employer in the UK is legally prohibited from discriminating on the basis of age, race, gender, gender reassignment, disability, sexual orientation, religion or belief during recruitment, but that prohibition alone is often not enough to promote diversity and inclusion (D&I) in every workplace. AM has looked at some of the research into the effects of active D&I policies on a company’s fortunes.

There has long been anecdotal evidence available of how a diverse workforce can improve innovation and financial performance and there is an increasing body of study that supports those conclusions.

Boston Consulting Group examined more than 1,700 companies in eight countries (Austria, Brazil, China, France, Germany, India, Switzerland, and the US) across a variety of industries and company sizes, looking at the diversity levels of their management teams. It then measured the percentage of those companies’ total revenue that came from new products and services launched over the past three years. It found that having a more diverse team increased revenues by 19% and earnings before interest and tax were nine percentage points higher than those companies with below-average diversity in their management teams. Businesses with employees from a good mix of ethnic backgrounds were 35% more likely to outperform their competitors.

Julia Muir, the chief executive of Gaia Innovation and the founder of the UK Automotive 30% Club, a voluntary group of executives with the aim of filling at least 30% of key leadership positions in member organisations with women by 2030, said research by Sodexo  had found a positive correlation between a strong gender balance and increased employee engagement. This had a knock-on effect on customer satisfaction and ultimately operating profits, she said.

“A more gender-balanced team leads to a happier team,” she said. “If you get more commitment from your staff that leads to more satisfied customers and, as a result, greater profits.”

Muir added that a study by EY and the Peterson Institute for International Economics had also revealed that a company made up of at least 30% female leaders had six percent better profit margins than those that didn’t and she also cited  McKinsey’s study showing that organisations in the top quartile for gender diversity were more likely to have financial ratings above the national average.

“All of this shows that gender-balanced teams perform better than those that are not,” she said. “That is largely down to having an effective and open-minded leader who manages the team well, creating an environment where it will thrive and perform well, translating to financial success.

“Diversity is about more than just being a good moral thing to do. It also has strong benefits to both your company and the wider economy by getting more people into employment and balance out some of the key roles.”

Steve Nash, the chief executive of the Institute of the Motor Industry (IMI), said the biggest advantage of a diverse workforce was customers feel more comfortable dealing with a company that reflects the make-up of society. That means more potential for sales, he added.

“If your business is only full of white males of a certain age, that’s not going to resonate with every customer,” he said.

“By having a more diverse workforce you are, in effect, taking away potential reasons why someone might not want to do business with you, and that can only be a positive.”

Jim Saker, the director of Loughborough University’s Centre for Automotive Management, said there was strong evidence that companies with a better gender mix at board level outperform less diverse rivals. However, he said that there was a lack of research into its effect at the lower levels.

“We should have diversity in the work place as the underlying base position,” he said.

“That’s easier said than done, however, because often a company’s culture is determined by who’s in charge, the role models and a host of other factors.”

Diversity and innovation in motor retail

While that’s not always reflected in the automotive sector, some companies, such as Jardine Motors Group, are leading the way in D&I.

Clare Martin, the group HR director at Jardine Motors Group, said one of the greatest benefits of workforce diversification was having people who think differently. That enables companies to have a broader perspective when it comes to change and innovation, she said.

“One of the benefits we see is around diversification of thought and contribution,” she said.

“As a business, we are constantly innovating and looking at how we do things differently, which means we need people who think differently.”

Increased D&I can also bring benefits beyond the bottom line, such as recruitment and retention.

Martin added that a more diverse workforce was also more attractive to new recruits, with 67% of jobseekers citing it as an important factor when considering offers.

“Within our business, we see the performance of more diverse teams delivering better results and we believe our 98% direct hire rate is a result of our strong employer brand which is partly driven by our approach to D&I,” said Martin. “Therefore, when it comes to attracting the best talent and outperforming the market, the commercial case for diversification is compelling.”

Reputationally, employers can also reap the benefits of diversity by being viewed positively by shareholders and customers alike. This is reflected in the fact that businesses are increasingly putting diversity and inclusion (D&I) at the top of their agenda.

New research by Auto Trader, Ennis & Co and Qlearsite has found that 88% of automotive organisations surveyed have identified D&I as a key priority, while 53% believe the need to attract and retain a greater array of skills and experience was the primary motivation for driving a D&I agenda. ALEX WRIGHT