Take the drama out of long-term leadership changes 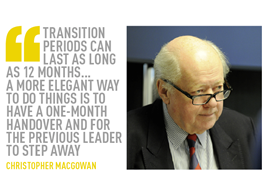 Dealer groups are no strangers to long-serving directors that make a big impact on the culture of a company.

Trevor Finn announced before the end of last year that he would step down as chief executive of Pendragon after 30 years of leading the business.

He continued in the role during Q1 while the PLC recruited former Jardine Matherson executive Mark Herbert as his successor.

In Pendragon’s case, there was not only the question of what happens next in terms of guidance, management style and culture for the Stratstone and Evans Halshaw dealerships across the UK, but also how a change of leadership affects the group’s share price.

Franchise partners also are particularly interested in the future stability and leadership choice.

Guy Liddall, the managing director of MT Select, said a dealer group’s strategy around appointing a new chief executive will usually depend on whether the departure was planned or was due to other eventualities, such as financial performance or illness.

Either way, there should always be a contingency plan in place to turn to.

Large businesses will usually have a 12-month notice period for their chief executive, so the process of finding a successor is a long one.

Liddall said: “The recruitment process will usually probe options from within and outside the automotive industry, but there is never going to be a 100% guarantee of success.

“You only have to look at Jose Mourinho’s recent sacking as manager at Manchester United. He was set up in an environment where he should have been able to have success.”

Christopher Macgowan, who was the chief executive of the Society of Motor Manufacturers and Traders (SMMT)  for nine years, helped to write a job specification for his replacement. This was refined with help from the board and a headhunter was appointed.

After that, he stepped away from the process and the SMMT got on with the recruitment process.

He said: “In some circumstances, transition periods can last as long as 12 months, although in those cases that indicates to me a degree of nervousness from the board.

“I think a more elegant way to do things is to have a one-month handover period and for the previous leader to step away, perhaps working from home and making themselves available on the end of the phone should they be needed.”

There is also a public relations process that every company will go through in the event of a change in leadership, and the ideal is that rather than being seen as a big drama, it should in fact be the complete opposite.

Macgowan said even a ma jor change of leadership should be seen as routine, with every step in the recruitment process a carefully choreographed process and an outlook of “business as usual”.

A change in chief executive shouldn’t be a worry for the business on a day-to-day operational basis, as there will be managers and other directors in place to maintain the business over the transition to new leadership.

Liddall said: “Within these larger dealer groups, the chief executive is of course instrumental in setting the agenda and direction of a company with a clear, multi-year strategic vision.

“However, the company is likely to be more than capable of continuing to operate over a period where a replacement is found. What’s more interesting is how the new chief executive communicates their presence once they have joined.”

This can either be through ‘pressing the flesh’ or even through something such as a video presentation to introduce them to new staff, particularly at businesses where there are hundreds of individual dealerships and thousands of staff.

Macgowan said: “No matter how big a figure you are or have become, you can bet your boots you report to someone – a chairman, shareholders or perhaps family members – and good governance demands that even the biggest of big beasts are answerable and can be managed.”

The Chartered Institute of Personnel and Development on what succession planning involves, how it links to talent management, and HR’s role. www.cipd.co.uk/knowledge/strategy/resourcing/succession-planning-factsheet

A tangled tale of whistle-blowers and boardroom intrigue from the Financial Times about the longest-serving chief executive of a FTSE 100 company. www.ft.com/content/617147b4-6cda-11e8-852d-d8b934ff5ffa

Filmed at the Stanford Graduate School of Business, Sir Alex Ferguson discusses the manager’s critical role in setting expectations, communicating, and recognising the people who work for you. https://www.youtube.com/watch?v=xnhu3N_nVsg