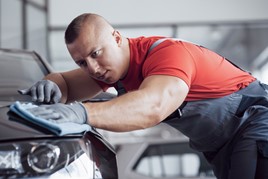 As the wider economy stutters and we start to worry about a recession, the valeting market is looking to the wider automotive sector and meeting the challenges head on.

Subsequent to the 2016 referendum result, valeting companies – which have relied on labour from eastern EU member states – have encountered difficulties with recruitment.

The falling pound/euro exchange rate hasn’t helped in attracting a migrant workforce that often came to work in the UK specifically to send money home. Valeting companies have had to address these issues.

Paul Cranwell, managing director of Motorclean, said: “There’s a huge shortage of labour. In the past, we’ve been reliant on a certain type of migrant labour force and what we’re seeing is a shortage of people in our sector.

“And if you look at what has happened, as far as the European workforce is concerned, given the state of the pound and the cost of living, they’re staying in Europe. We set up, some time ago, our own internal recruitment section of the business, which was to help with that supply of labour and that works well. But it’s one source of many that you’re having to adopt in order to keep up with the demand for the labour.

“The British labour force is also very fluid. It doesn’t stay around for too long, it will be off to somewhere else really quickly, so that’s been a difficult thing to manage. That pressure on the quality of labour is difficult at the moment.”

Martin Peters, sales director of the Autoclenz Group, has a similar tale to tell: “There’s a lot less labour looking to work in this sector. Therefore, you have to pay more to attract people. Our labour, which is about 1,600 operators, is 80% of my costs. Five years ago, it was probably 73%.”

That shortage of labour also brings with it questions of quality.

Peters added: “We go through strenuous border immigration compliance checks. A year ago, probably the 33/34% of people who wanted to work with us couldn’t, because they weren’t who they said they were. That is now 42%.

“What that tells me is this lack of labour is really flushing out, unfortunately, the real bottom of the barrel. People who shouldn’t be here, or shouldn’t be working, or don’t have a passport or licence. And that’s a very dangerous place to be.

“Because with those people, there’s no trace-ability or accountability. If, heaven forbid, something happens such as they have an accident, I can give their details to the police or the insurance company. But if the details are not legitimate or correct, they’re ghosts, you will never find them.

“Some of our key clients, whose shares are quoted on the stock market, only need one incident, with a member of the public hurt, and that’s a million-pound lawsuit and potential implications for share price.”

The good news is that valeting companies are looking at alternatives.

One plan is to look at training young British workers, using valeting apprenticeships. This is something that Autoclenz is investigating.

“We’re looking at a trial apprenticeship with Burton College, which is not far from our head office,” Peters said.

“The take-up on that is really quite interesting, because if you’re a 16-year-old that likes the idea of a career in the motor trade, you’ve only got a few choices at the minute. One is a mechanic and the other may be in the bodyshop. We want to also bring valeting into that equation.

“Of course, that has to be on an employed model – and there’s a cost implication to that. I think we have to accept that in the future we’ll have to employ our people, just purely for supply and demand. I think employed roles actually potentially help to market the job better, to give that security.”

Offering a wider variety of services beyond just valeting is an other way that companies in the sector can keep their turnover growing.

George Gray, managing director of Secure Group, outlined how his company has diversified. “We’ve expanded our service portfolio from just purely valeting to support services including driver hire, technicians, meet and greet staff, and basically yard staff as well. So, we can now supply additional services along those lines.

“Also, our Auto Imaging division has now taken on approximately 180 customers within the past 12 to 14 months. The key to that success is our app, which works with the Secure Valeting online system and has an API (application programming interface) that notifies the dealership when cars have been valeted and they’re ready for imaging. We call it a real-time valeted shortlist. Dealers know if a vehicle is in the workshop or in the valet bay. Or sometimes even if it’s onsite or not. It’s state of the art and I don’t think anyone else does it. It has also proven to be a fantastic success and the app is now also being piloted by two major manufacturers.”

It’s a similar story at Motorclean, with Cranwell telling us: “From an R&D perspective, there are a few things we’re working on, but they’ve not come to market yet. We’re looking to continue expanding our services and to increase sales penetration in the three different sectors we work within.”

Autoclenz has also expanded into the realm of offering services directly to the consumer, such as an alloy wheel refurbishment centre in Crewe that has been an unexpected hit with consumers, who perhaps need wheels refurbished before returning a lease car, for example.

Peters said: “The world’s changing and we’re trying to position ourselves for that future – the car will be the customer, not a dealer group, not a manufacturer, not a rental company. A company that can provide multiple, agile, mobile solutions will be the winner. That’s really where I’m trying to point us at the minute, is smart repairs brought to your home, alloy wheel repair brought to your home.”

He also cites the company’s relationship with Rockar, which partners with manufacturers to sell cars from shopping mall retail outlets. Purchases are delivered to customers by Autoclenz staff (wearing Rockar and manufacturer-branded clothing) and when a service is due, these staff can also pick up the car and deliver it to the service centre, and then get it back to the owner.

“That’s the ever-changing world. We’re diversifying everything we do, adding value through that whole customer journey,: said Peters.

“We’re actually future-proofing our business because there will still be valeting. Even if there are driverless cars, you’ll still need a piece of apparatus to be cleaned, maintained and repaired.

“This is what interests me with the rental market. We work with Avis, which owns Zipcar. It has 3,000 Volkswagen Golfs and Polos in London and we are currently managing the turnaround, cleanliness and systems checks on those vehicles. That’s a very mobile and agile solution for them.

“Ultimately, in the next 10 years, if you’re a business that can provide mobile solutions, where you have to go out to a vehicle – whether shared membership, subscription vehicle, rental vehicle, lease vehicle, whatever that is – you’re probably in a very good position.”

Successful valeting companies have grown over the past couple of decades by adapting to the changing market, offering more services and spotting opportunities. Those companies will survive – despite the challenges – because they continue to do that, year after year.