When ‘banter’ in the workplace goes too far 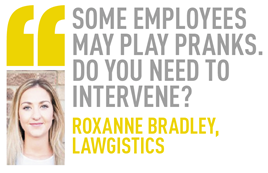 The dismissal of two volunteers by the RNLI over a sexually explicit mug which they defended as a “light hearted joke between the crew” has highlighted the need for businesses to have clear policies about ‘banter’.

The pair were initially suspended, then dismissed, after a manager found one had “produced a hardcore pornographic image of a fellow crew member on a mug” and the other had produced graphic images of a crew member without their knowledge.

In their defence, the two claimed the organisation had overreacted to what was meant as “a light-hearted joke”.

Joel Combes, Lawgistics sales and marketing director, said: “Banter is prevalent in the industry and it is certainly something we give advice on. Around half of our calls are employee-related these days and we now have three employment-related specialists as a result.

“Precautions can be taken by offering employee awareness courses and diligence can be shown by having a clause in contracts or relevant policy handbook.”

The Institute of Leadership and Management’s head of research, policy and standards Kate Cooper said the rule should be that if banter makes someone feel uncomfortable, their discomfort should always eclipse the speaker’s own assessment of what they have said.

Cooper said: “Often, a speaker who has caused visible offence in an inappropriate context will try to play down the effects of their words. But that whole, ‘oh don’t be so silly’ mentality is unequal to the offence itself. People are entitled to feel discomfited.”

The Equality Act 2010 allows employees to bring claims of discrimination and harassment against their employer in circumstances where they have been on the receiving end of, or have even simply overheard, ‘banter’ which they consider has overstepped the mark.

If a claim is successful, it can result in a big bill for the employer, as well as reputational damage.

Listers Group has found itself in a legal battle recently with former used car sales executive, L Bali, who took action after being dismissed from its Audi Coventry dealership.

Among Bali’s allegations were claims colleagues had made racial jokes, gestures and accents when speaking to or near Bali, and passed offensive remarks in Urdu and Hindi.

Bali claimed the comments had been dismissed as “banter” by his colleagues.

The Birmingham Employment Tribunal rejected many of Bali’s claims, but decided he had suffered victimisation because of failings in the grievance process, while Listers Group had breached the implied term of trust and confidence in employment with a number of inappropriate actions.

Judge Broughton’s judgment states Listers’ internal process had considered the remarks made in other languages offensive, but no different to other forms of banter and unacceptable swearing in the workplace and thought the remarks had no racial significance, which was “almost wilful blindness”.

The tribunal concluded the only possible award could be for injury to feelings. This means the claimant could receive compensation for the upset, hurt and distress from the discrimination that has been caused.

A provisional remedy hearing has been scheduled in case the two parties cannot come to an agreement on their own.

Roxanne Bradley, Lawgistics legal advisor, said: “Most employers would prefer their employees to get on well, but some employees may regularly play pranks on each other. Do you need to intervene?

“Horseplay which causes harm could also mean there is a risk to the company, either by a criminal prosecution under the Health and Safety Work Act 1974 or by a civil case.”

Bradley said one of the factors that will be considered in such cases is whether the acts of the staff are something which that employer should have anticipated. If there is evidence of similar events in the past, it is likely the employer will be held responsible.

Bradley said: “It’s worthwhile ensuring within the terms and conditions of employment, horseplay is banned and it will be regarded as a disciplinary offence.

“If any complaint of bullying, assault, horseplay or harassment arises, ensure this is investigated and dealt with appropriately.”