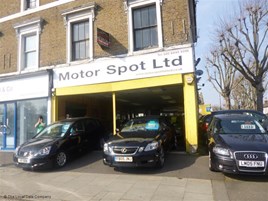 An independent used car dealership has had its consumer credit permissions withdrawn by the Financial Conduct Authority.

The FCA had served notice on Motor Spot Limited (MSL), of 165 Uxbridge Road, London, that it had decided to cancel its permission, and put this into effect on October 12.

The FCA’s notice states that the authority “is not satisfied that MSL is a fit and proper person having regard to all the circumstances, including whether MSL managed its business in such a way as to ensure that its affairs were conducted in a sound and prudent manner.”

MSL failed to comply with the regulatory requirement to submit a return to the FCA, it said.

“MSL has not been open and co-operative in all its dealings with the authority, in that MSL has failed to respond adequately to the authority’s repeated requests for it to submit the return, and has thereby failed to comply with Principle 11 (of the FCA’s principles for businesses).”

Companies House records show Motor Spot Limited has a sole director, Tasnim Qaisar, and the business was incorporated in 2013.

Its website, which is powered by AA Cars and states that all cars are HPI-checked, currently shows stock typically ranging from £695 to £6,995, except for a few higher priced prestige cars.