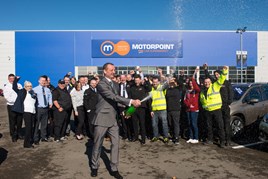 Motorpoint has opened the doors of its 12th site to mark a period of expansion which has created four car supermarket sites in just 18 months.

The top ID50 used car supermarket giant has followed the launch of sites in Castleford and Oldbury, and the opening of Birtley in November 2015, with the creation of its latest facility in Sheffield.

The Sheffield site, a short drive from the Sheffield Arena and Meadowhall Shopping Centre, is a 10-acre former Carcraft site located close to junctions 33 and 34 of the M1.

The site will have available up to 500 nearly new vehicles from over 30 different manufacturers.

Mark Carpenter, Motorpoint’s chief executive, said: "I am pleased that we have opened our 12th site in what has been a busy period for the Group.

“Sheffield is a key demographic area and we are delighted to have generated 50 new jobs in the region.

“The recent openings are performing well, and the management team is confident that this new site will be a further successful addition to the Group's portfolio as we deliver on our focused approach to new site openings to capture additional market share."

Motorpoint will publish its final results for the year ended March31st, 2017 on June 12.