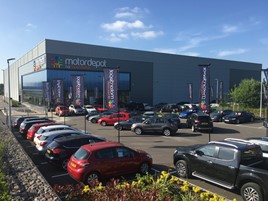 Motordepot has announced its plan to make Sheffield the site of its ninth used car supermarket as part of its recent expansion drive which has added three new locations within the past 12 months.

A three-acre site, located on Handsworth Road, Sheffield, has been acquired and should become the fourth branch to be launched within the last 12 months following successful openings in Worksop, Newcastle and Barnsley.

“A major refurbishment programme will take place over the next few months with the official opening expected in the autumn”, the group said.

The Sheffield site – located within two miles of existing car supermarket sites operated by Motorpoint and The Car People in the city – will offer over 300 used vehicles on display with access to a further 3,000 vehicles in group stock.

Motordepot anticipates that up to 30 new jobs will be created in the local area as a result of the development.

Managing director, Steve Butterley, said: “Demographically, Sheffield is a really good fit for us, the new branch will compliment our nearby sites in Barnsley and Worksop, assisting to increase our market share in the area.

“Our recent branch openings are performing very well and our new teams have really bought in to our culture of providing the best customer experience we can, in an open, relaxed and ethical way”.

In order to accelerate further expansion, Motordepot recently opened a four-acre vehicle preparation centre in Goole, East Yorkshire, with the creation of up to 100 new jobs.