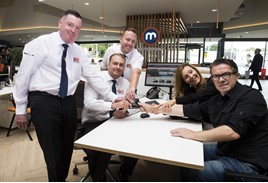 Motorpoint Glasgow has been officially opened by Mark Cox and Jane McCarry, the stars of BBC television comedy Still Game.

Cox, who plays Tam in the series, and McCarry, who plays Isa, took time out from filming the final series of the hit BBC series to help welcome customers to the new facility on Hamilton Road, Mount Vernon.

Motorpoint said that it had teamed up with Glasgow-based award-winning interior architects BSD Associates earlier this year to transform its showroom into “a unique experiential space” where car buyers can relax in comfort to choose and buy a low mileage nearly car from 30 different manufacturers on the same day.

Following a two-month programme of development, the showroom has re-opened with a boutique style Moto Café, a Kids Zone and an area dedicated to customer’s pets as part of the branches continuing support for The Dog’s Trust.

Adam Gilmore, general manager of Motorpoint Glasgow, said: “We are extremely grateful to Tam and Isa for officially opening our fantastic new-look showroom.

“Staff, suppliers and customers alike were delighted to see them take time out to help celebrate our big day.”

Motorpoint established its branch in Glasgow over 15 years ago. Since then it claims to have sold a low mileage nearly-new car to every postal code area in Scotland.

Located close to the M74, all cars come with less than 25,000 miles and the balance of the manufacturer’s warranty.